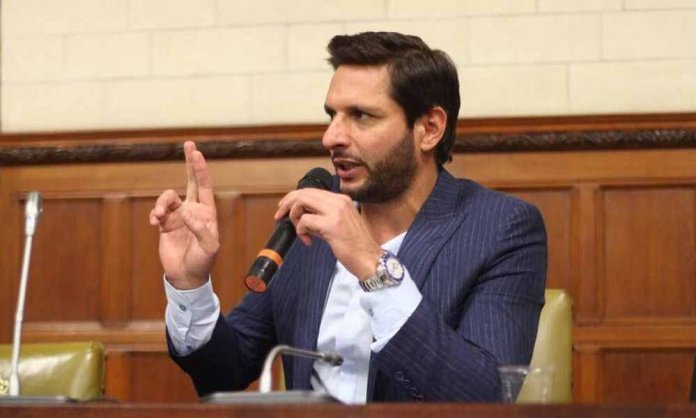 While addressing students at the British Parliament, the cricketer stated:

“Don’t give Kashmir to Pakistan or India either. Let them be independent. Humanity is big thing. Human are being killed there (Kashmir). It hurts to see humans are being killed whatever religion they may belong”

The full video of the Kashmir Issue being addressed by Shahid Afridi at yesterday’s Parliament session being manipulated by the Indian Media #ShahidAfridi pic.twitter.com/CeH2bCiVLG

Indian media was quick to create to react to his statement. So much so, the cricketer was labeled as a traitor to Pakistan and Imran Khan.

#shahidafridi just check, how #indian media creating controversies for thier own benefit.
My question is
Why do we give them such an opportunities.@SAfridiOfficial @ImranKhanPTI @FarhanKVirk pic.twitter.com/BoPMvGF7Ye

#AfridiExposesPak | He (Shahid Afridi) proved again that he is an eccentric personality, he may not have the knowledge of Kashmir: Qamar Cheema- Strategic Affairs & Defence Analyst (Pakistan) pic.twitter.com/v37pSbYGBe

In an attempt to clear up the mess, Shahid Afridi took to Twitter to clarify that his statements are being blown out of proportion by the Indian media.

My comments are being misconstrued by Indian media! I'm passionate about my country and greatly value the struggles of Kashmiris. Humanity must prevail and they should get their rights.

My clip is incomplete & out of context as what I said before that is missing.Kashmir is unresolved dispute & under brutal Indian occupation. It must be resolved as per UN resolution. Myself along with every Pakistani support Kashmiri freedom struggle. Kashmir belongs to Pakistan.

However, the damage was done. His views hurt the sentiments of his countrymen as well and provoked India to cash on the statement.

Independent kashmir is a good why to get rid of indian Terrorism in kashmir.

I agree with Shahid Afridi, Kashmir belongs to Kashmiris only, let them decide who they want to be with or without.

Afridi’s wife, Nadia Shahid took to Twitter as well and shared a powerful quote by Allama Iqbal that how politics divides nations.

“It seems that Afridi wants to play in the Indian Premier League and is issuing such statements owing to that.”

This is not the first time Afridi kickstarted a storm by commenting on the sensitive issue. Back in April, the sports star condemned the bloodshed in Kashmir and urged UN to take note of the matter.

Appalling and worrisome situation ongoing in the Indian Occupied Kashmir.Innocents being shot down by oppressive regime to clamp voice of self determination & independence. Wonder where is the @UN & other int bodies & why aren't they making efforts to stop this bloodshed?

What do you think of Afridi’s statement? Let us know in the comments below.