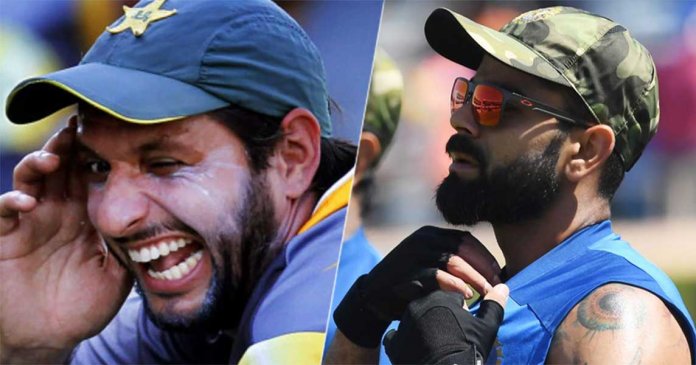 During their press conference, Shahid Afridi was asked a question related to their biggest rival, India.

Previously, the Indian Cricket Team had worn camouflage hats in support of their army while playing a series against Australia.

When the journalist had asked this question, they were requested to only keep it relevant to PSL, however, Lala being Lala, he gave a hilarious answer which threw everyone into fits.

ICC Spokesperson had also responded to Team India donning the hats against Australia. They said:

The BCCI sought permission from the ICC to wear the caps as part of a fundraising drive and in memory of fallen soldiers (in Pulwama attack), which was granted.

While Pakistan Cricket Board was unhappy with the display and wrote a strong letter to ICC in response.

“There’s absolutely no misunderstanding in the ICC about our position,” PCB boss Ehsan Mani said late on Sunday in Karachi.

We believe that cricket and sports should not be used for politics and we have said this very clearly. Their [India’s] credibility in the cricketing world has gone down very badly. – PCB’s lETTER TO icc

In the past, ICC has taken action against players like Moeen Ali and Imran Tahir over showing sentiments during matches.

Moeen was banned five years ago for donning an armband which showed ‘Save Gaza’ and ‘Free Palestine’ in a match against India. Tahir was reprimanded for the displaying of Junaid Jamshed’s image under his national jersey against Sr Lanka in 2009.

“You have two examples from the past already, where both Imran Tahir and Moeen Ali were sanctioned for something similar,” Mani said. “The ICC had taken strong action against them and we have sought similar action against India. The permission they took was for a different purpose but they acted differently.”

PCB Invites BCCI to Watch the PSL 4 Final in Karachi