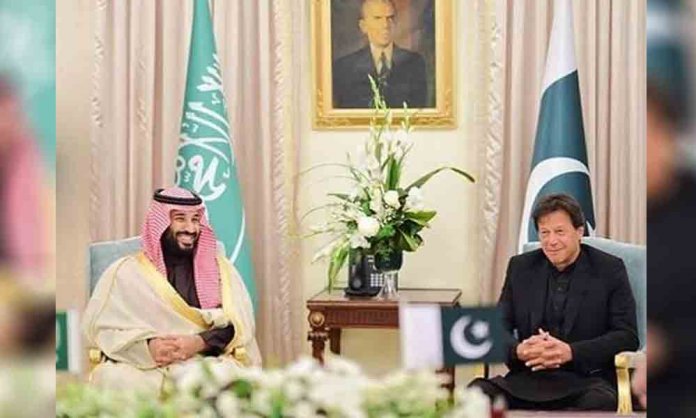 Update: On Monday before Crown Prince Mohammed bin Salman’s departure, the royal highness announced that he will reduce the political tension between Pakistan and India.

The prince furthermore added that Pakistan has the potential to become a big economy by 2030.

There is great leadership here to put Pakistan in the right position. We can see it happening. We believe in Pakistan. Because of our long relations we want to be part of that journey and we want to risk our money, to risk our efforts, to start from day one

The world witnessed the historic arrival of Saudi Arabia’s Crown Prince, Mohammad bin Salman in Pakistan after he was received and welcomed by Prime Minister Imran Khan himself.

A grand reception was held in his honor and the royal guest was presented with the Guard of Honor at the PM House in Islamabad on Sunday. The Crown Prince is on a 2-day official visit as per Imran Khan’s invitation.

Considering the significance of the bilateral relationships between the two Islamic states, the arrival of the Saudi crown prince in Pakistan is making headlines around the world.

From topnotch preparations to welcome the royal guest to a one-to-one meeting between the Saudi Prince and PM Imran Khan, every moment and movement from this historic arrival is making headlines!

1. An Air Show to Escort the Saudi Crown Prince

2. A Warm Reception at the PAF Base Nur Khan by PM Imran Khan

The royal guest received a warm welcome by PM Imran Khan and Chief of Army Staff General Qamar Bajwa on his arrival at the PAF Base Nur Khan with cabinet members.

3. PM Imran Khan Himself Driving the Saudi Crown Prince to the PM House.

The premier himself drove the Saudi Crown Prince to the Prime Minister House, putting forward an excellent example of hospitality and fraternity.

The Prime Minister of Pakistan Imran Khan himself drove His Royal Highness, the Crown Prince of the Kingdom of Saudi Arabia, Mohammed Bin Salman to the Prime Minister's House. 🇵🇰🇸🇦 #CrownPrinceinPakistan #PakSaudiFriendship

4. A Red Carpet Reception and Guard of Honor at the PM House

At the PM House, HRH Mohammad Bin Salman, who is visiting Pakistan for the first time after rising to the status of the Crown Prince of Saudi Arabia in 2018, received the guard of honor by Pakistan Armed Forces.

During the one-to-one meeting between PM Imran Khan and the Saudi Crown Prince, a total of 8 agreements and Memorandum of Understanding (MoU) of $20 Billion were signed between the two countries in diverse sectors.

The delegates from both countries were present during the ceremony.

PM Khan thanked the royal guest for visiting Pakistan and for the reception during his visit to Saudi Arabia. The premier said:

For Pakistanis it is a great day.

Saudi Arabia has always been a friend in need.

Imran Khan also discussed the Hajj policy of Pakistan with the Saudi prince.

For Pakistanis going for Hajj each year, we request you to allow their immigration in Pakistan so it is convenient for older people and for those who have saved money for it all their lives. – Prime Minister Imran Khan to HRH Prince Mohammad Bin Salman.
#CrownPrinceinPakistan pic.twitter.com/zGhjZPFh0L

HRH Mohammad bin Salman also addressed the delegates and appreciated the hospitality of Pakistan. He said that Saudi Arabia needs Pakistan’s help in raising its tourism industry as he mentioned the signed agreements worth $20 billion.

Consider me in Saudi Arabia the ambassador of Pakistan. We cannot say no to Pakistan. Whatever we can do we will deliver.

6. Saudi Crown Prince Planting a Tree at the PM House in Islamabad Alongside Imran Khan.

As a sequel to Prime Minister Imran Khan’s request, His Royal Highness the Crown Prince of KSA Mohammad Bin Salman has ordered the immediate release of 2107 Pakistani prisoners Saudi Jails.

The historic arrival of the Saudi Crown Prince in Pakistan is expected to be fruitful for both countries in terms of bilateral relationships and economic ties.

Saudi Crown Prince—Mohammad Bin Salman will invest a whopping $21 billion in different across Pakistan which will be divided into different sectors i.e agriculture, in 3 phrases.

A State-of-the-Art Oil Refinery and Petrochemical Complex is to be set up in Gwadar with an investment of $11 billion to open new energy vistas in Pakistan to improve the economic conditions of the country.

An MOU was signed between the Minister for Petroleum Ghulam Sarwar Khan and his Saudi counterpart for setting up an oil refinery ($10 billion), a petrochemical complex ($1 billion), installation of two Re-gasified Liquefied Petroleum Gas (RLNG) plants with an estimated cost of $4 billion and another $2 billion investment in mineral development sector according to APP.

Crown Prince Muhammad Bin Salman has issued directives to establish a healthcare center after Jeddah floods hero Farman Ali Khan in Khyber Pakhtunkhwa (his home town). This directive was given out on Monday before the prince left for India after completing his historic visit.

Farman Ali Khan became a hero in both Pakistan and Saudi Arabia after he saved 14 lives in Jeddah’s devastating floods in November 2009.