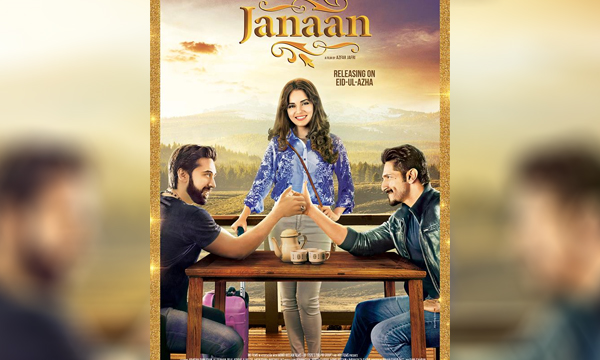 The upcoming Pakistani movie Janaan has just rolled out its second official poster, raising the hype and excitement for its Eid-ul-Adha release even more. The cast includes Ali Rehman, Bilal Ashraf, and Armeena Khan in lead roles and has been written by Osman Khalid Butt.

The star-studded poster features the whole ensemble cast of the movie and has a Bollywood feel to it.

Check it out the latest official poster of Janaan below ! The official trailer of the highly anticipated Reham Khan’s production debut ‘Janaan’ is out and has us wanting more!

All set to release on September 13th, 2016. “Janaan is a story of a Pakhtun girl who returns from Britain after her education. The story comically defies the stereotypes about Pashtun families”, says Hareem Farooq, who will co-produce the movie.

It was reported that the film aims to reflect the softer side of Pakistan, however, I highly doubt the trailer showcases that. Reflecting the very cliched Bollywood mantra for success; a girl from abroad stuck between two great guys who are brothers- the concept is a well-tested formula for success.

The trailer seems pretty interesting and kind of confusing- seems like a lot of initial shots are picturised in Canada or maybe New York? Watch the trailer below and figure out for yourselves.

Let’s see how the movie turns out!

With the uber gorgeous, Armeena and the two Pakistani heartthrobs Ali Rehman Khan and Bilal Ashraf the movie has been creating a major buzz!

Produced by IKR films, the movie has created major hype- the cast include industry veterans like Ajab Gul, Mishi Khan, and Nayyer Ejaz.

A post shared by PAKISTANI CELEBRITIES🇵🇰 (@pakistani.celebrities) on Jul 3, 2016 at 5:29am PDT

janaan • islamabad ka shoda vs. motu kharoos ft. @armeenakhanofficial, @alirehmankhan & @ashrafbilal SORRY! MY WiFi wasn't working! Here it is.. but WAIT! Watch the VM first – watch it till the very end – THEN read the description. OFF YOU GO! Now, join me as I have an uncontrollable laughter attack. The very last frame of the VM still kills me, and I made the VM. I'm not sure if anyone else will see the humour there, but I'm dying of laughter here! All right, if you know me, you know my love for all things 'Janaan'; and it makes me so (strangely – because I am not even a part of the crew or anything, but.. just as a fan of/believer in Janaan from day one) proud to see how well, anything related to the movie, is being received: first look, poster reveal, music (what we've heard of it in those tiny snippets), teaser and, now, official trailer. And so that's why it's never enough for me to express my love in just one post.. so I bombard you guys with teasers, screenshots, reviews and this.. whatever-you-want-to-call-it. Here's an alternative intro, if you will, to the three main characters of Janaan: the quirky shoda Daniyal, the kharoos-yet-narmdil Asfandyar and the charmingly witty and hilarious Meena. So.. are you team #IslamabadKaShoda or team #MotuKharoos? I'm definitely #TeamIslamabadKaShoda! He had me at 'helloohmyGodmysleeveisonfiyaah!' Lol. Insha Allah, the review shall be up tomorrow! Till then, I hope you enjoyed watching this VM. Cheers! #FatOwlVMs #Janaan @Janaanofficial #ArmeenaKhan #AliRehmanKhan #BilalAshraf #HareemFarooq #OsmanKhalidButt #IRKFilms #RehamKhan #TeamMotuKharoos #ArmeenaRanaKhan @jafriazfar @hareemfarooq #FatOwlsJanaan

Happy Defence Day from the cast of #JANAAN. #bilalashraf

Watch the teaser trailer below:

This is what the producer said about the movie:

“It feels great to be acknowledged at such mega international platforms. What makes it even special for us is the fact that the industry on a whole is growing with such exposure. Being able to have a larger canvas of production and promotion is always a positive sign for a better tomorrow. And I feel honored to have been part of such a movement.”

When asked about what the audiences should expect from the movie, the director said:

“From Janaan, you can easily expect a festive, complete package that has all the elements that make for an entertaining and enjoyable watch. It has romance, action, drama, revenge, music, comedy and mirrors the culture of the pakhtun.”

The news was announced by ARY Films, via Twitter:

Janaan is written by Osman Khalid Butt and will feature Armeena Rana Khan as the lead protagonist. The movie is said to be a romantic comedy, revolving around a Pakhtun family and is aimed to portray Khyber Pakhtunkhwa and its people in a positive light. The movie will be dubbed entirely in the Urdu language.

The first lady of Khyber Pakhtunkhwa, Reham Khan, has been on the mission to change the perception of people about her province since she married Imran Khan. While her husband tries to revamp the province with his political talents, Reham Khan will focus on changing the image of KPK through mass media.