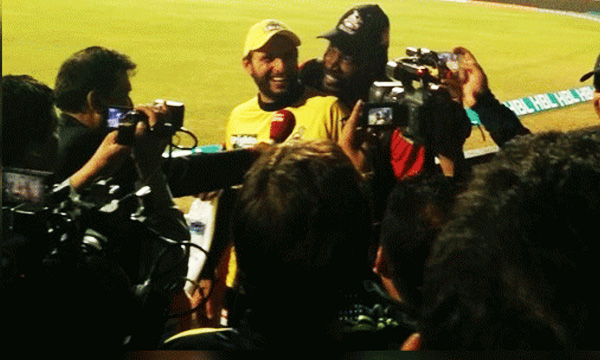 Chris, while talking to Khaleej Times stated, “PSL is a wonderful tournament and everybody is enjoying in Dubai and Sharjah. We have seen some top performances and young Pakistani talent is amazing as they are enthusiastic and eager to learn from big names in the game”.

He stated that the efforts of Pakistan Cricket Board (PCB) to set up the league have made every party quite satisfied so far. Answer another question Gayle stated: “I know people come to watch me hitting sixes and fours and I always try to do that. But sometimes things don’t go your way. That is why it is called cricket”.

“Despite my failure with the bat, it was a wonderful victory against one of the top teams Peshawar Zalmi captained by my best friend Boom Boom Afridi,” he stated.

Chris hoped that things can alter after this match and people will see some definite sparks. “You need time to gel with new players and I hope my big innings is round the corner.”

“I can sympathise with cricket-hungry people of Pakistan for lack of international cricket in their country. I hope the PSL will be staged in Pakistan in near future. It was heartening to see people thronging the historic Sharjah Stadium. It shows the popularity of the game in this region,” Gayle said.

While speaking of his injury Gayle stated; “I have got some niggles but it is not a serious injury. I hope to be fully fit soon. I am surviving this and playing cricket.” –APP