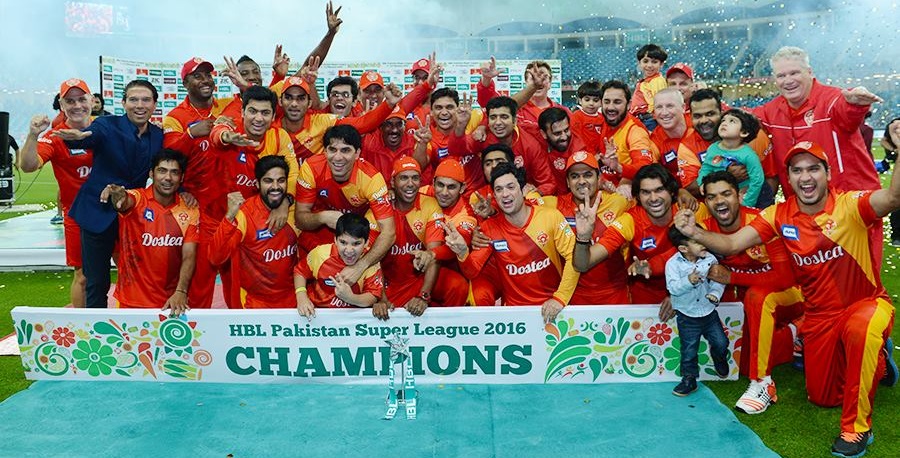 Quetta Gladiators were put into bat by United captain Misbah ul Haq after he won the toss and majority declared it a wrong decision. Gladiators set a big target of 175 runs for Islamabad United and some thought it is all over for Islamabad team as they cant be able to chase such a big total. Ahmad Shahzad (64) and Kumar Sangakkara (55) led their side to this score with their half centuries. Andre Russel picked up three wickets and and in the end he was given Highest Wicket Taker of PSL  (16 wickets).

Lifting the cup – say hello to your champions the @IsbUnited! pic.twitter.com/H0BZeLpY2b

In chase of 175, United players were on the kill specially opener Dwayne Smith (73) and Brad Haddin (61*)who made this run chase so easy for them with their brilliant batting. Gladiators could not create problems for United in chasing this huge total and they looked quite ordinary with the ball and in the fielding department. Captain Misbah ul Haq played the winning shot the when 1.2 overs to spare and team United did it easily which was looking very tough though.

One of the finest catches of the #HBLPSL, on its biggest stage, against one of its biggest players! WOW! pic.twitter.com/f8R0H6Yyxy

Dwayne Smith was declared man of the match for his match winning knock of 73 runs.

The final match of inaugural Pakistan Super League (PSL) T20 2016 is here and one of the two teams, Islamabad United or the underdogs Quetta Gladiators, will clinch the title in Dubai International Cricket Stadium today and become the first ever winner to the HBL PSL T20 2016 trophy.

No one knows who will be #PSLKaPehlaBadshah, but this, expected to be high voltage PSL Final, has taken Pakistani fans by storm and why not, the tremendous tournament entertained them with some real and classy cricket in the previous games.

The spectators in the stadium and those who will be glued to their TV screens are expecting a match full of thrill; an epic show today by both teams for a superb ending of the league instead of a one sided match.

So here we are – the final day of the #HBLPSL. It has been a truly incredible journey, one that all of Pakistan will remember forever…

Let us talk about the PSL finalists and their chances of winning this match, and to be honest who would have thought Quetta Gladiators and Islamabad United will be head to head in finals, but it is and both have shown some great on-field performances to reach here.

Quetta Gladiators were quite under estimated before the tournament commenced, but they were on the kill throughout this league and played brilliantly against every opposition. Their team work, team combination, hunger for win and playing every match with a required game plan has lead them to be first contender of  PSL T20 trophy. Will Sarfraz Ahmad has devised a strategy to pull the things in final, well we will see in few hours but Gladiators are favorite for this match on the basis of their previous record.

Islamabad United, the dark horse, slowly and steadily managed to make into the finals and they are unbeaten from their last four matches. United without the big guns, is not strong as Gladiators on the cards but they can be the champions if they do well on the ground. Misbah led team is on the rise after struggling a bit in first few matches and they might give surprise today.

Like all previous night matches, toss will be crucial but since it is final we are not too sure that capatians will like to chase a total if they win the toss. It’s all about handling your nerves and pressure in big matches and the team which will be able to do this, will be triumphant.

The stage is set for a grand battle of PSL finale and all fans are exuberant for the live action about to start soon, so keep your fingers crossed. The match is being screened in Cinepax Cinemas across the country.