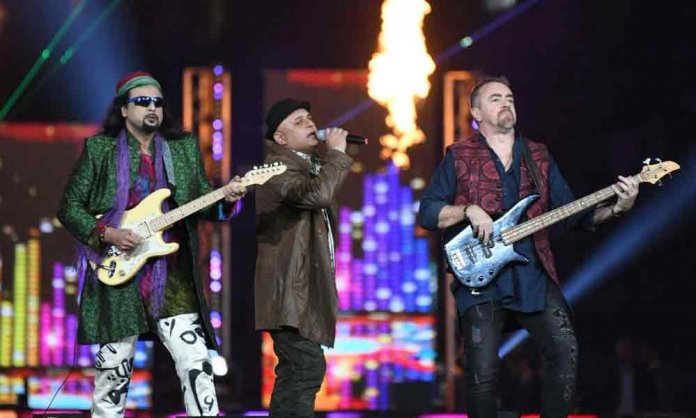 The opening ceremony of Pakistan Super League proved to be one of the most spectacular extravaganzas of the year where cricket met entertainment and left the audience awestruck.

Our favorite Pakistani celebrities like Fawad Khan, Shuja Haider, Aima Baig, Junoon, Boney M and others enthralled the audience with their performances and everybody enjoyed every bit of it.

Moreover, many Pakistani celebrities were present at the ceremony to support their teams and were all decked up beautifully.

The Junoon band also got on the stage and blew the audiences away with their powerful performance.

The band is rightly known for breaking doors as they literary left the audience grooving to their beats.

It was a treat for the spectator’s groove on the patriotic songs!

However, during the performance, the ace Pakistani singer Ali Azmat suffered a major wardrobe during his performance and now the Twitterverse just cannot stop talking about the incident.

Special shout out to that last button on ali azmat's shirt that tried to keep all its burdens inside but had to accept defeat in the face of his powerful tunni. The fallen warrior shall be remembered 😔✊

However, his lovers stood up for the legend and defended him like true fans!

Ali Azmat is the only true rock star. #PSLOpeningCeremony

some of y'all are so worst of your kind, come on man, stop with this BS of mocking ali azmat and 'ghareebon ka pitbull' thing, you lot have no respect, you people are for real lost -_-

Well, we think that the incident can happen to anyone and we are nobody to troll our celebrities!