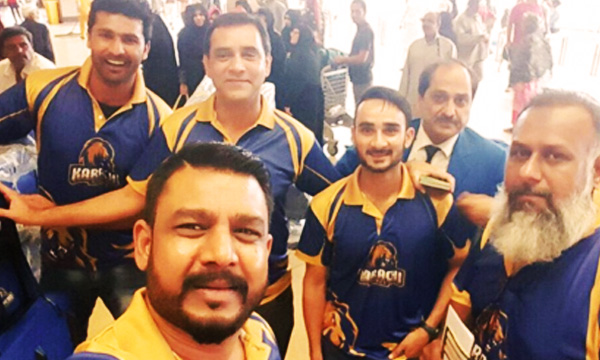 UPDATE: Karachi Kings has arrived in Dubai for participating in the first edition of PSL 2016, according to ARY News. The members of the team were given a warm welcome by the ARY Digital Network officials and the administration upon arrival.

The President and CEO of ARY Digital Network, Salman Iqbal is the frachise owner, who said that the foriegn players in the franchise squad will be reaching Dubai by February 5th.

Rise and shine! The Karachi Kings tuck into the fabulous breakfast spread at The Conrad. pic.twitter.com/y0nt01AAyv

Sohain Tanvir said that the team will be winning the first edition of the tournament since it is a strong one. The fast paced player, Sohail Khan was also quite optimistic about Karachi Kings winning the trophy.

Saifullah Bangash and Mir Hamza have welcomed the tournament; the squad had left for the UAE to participate in the inauguration of PSL 2016, Sunday evening.

The KINGS have landed! @KarachiKingsARY are pretty sure they will be the victors. What do you think? #HBLPSL pic.twitter.com/WbGOayJzTU

Before the team’s departure, a reception was given in the team’s honour in which ARY Digital Network President and CEO Salman Iqbal along with former cricketers and famous personalities were present.

The most expensive and popular Karachi Kings squad of the Pakistan Super League (PSL) 2016 has left for United Arab Emirates (UAE) to participate in the inauguration edition of PSL, as reported by ARY News.

At the time of boarding their flight for the UAE, the Karachi Kings squad took selfies with the fan at the airport and interacted with them.

A reception was also given earlier to honor the team; the event was graced by ARY Digital Network President and CEO Salman Iqbal. Former cricketers and other well-known personalities from the Pakistani media and cricket landscape were also present at the occasion.

Mir Hamza, Saifullah Bangash and Sohail Khan left for the UAE from Karachi along with other officials while the rest of the team squad left from Lahore for the Gulf.

The CEO and ARY Digital’s President stated that the Karachi Kings team will definitely need all the support they can get in order to win the title.

“With your support, we will bring the title home”, Salman Iqbal stated.

Karachi Kings is to play its firm match on February 5th against Lahore Qalandars. The team will encounter Quetta Gladiators on 6th February and Islamabad United on 7th of February.

The owner of the Karachi King’s team made an announcement that they will arrange a talent hunt program in the upcoming year.

Karachi Kings is to face Peshawar Zalmi on the 11th of February while on 12th February, Karachi Kings will play against Lahore Qalandars again.

On 13th February, Karachi Kings will encounter with the Quetta Gladiators and Islamabad United on the 14th. The team’s final showdown will be played against Peshawar Zalmi on the 17th of February.