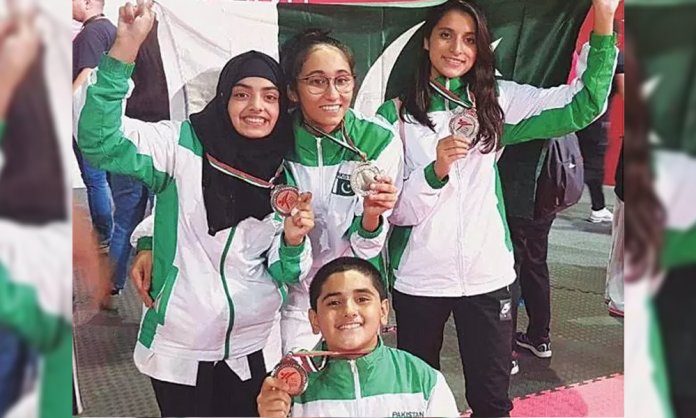 Pakistan‘s Taekwondo team participated at the  El Hasan International Open Cup Youth Cadet Taekwondo Championship in Jordan and put on a show with performances for everyone to remember.

Team Pakistan won a total of 8 medals including 2 silvers and 3 bronze. The young martial arts athletes dedicated their medals and victory to the martyred soldiers of the nation.

Pakistan Taekwondo Federation’s President Retd. Col. Waseem Ahmed Janjua shared that he is very proud of the children and their great display of talent.

While interacting with the media, Silver medal winner Fatima shared that she had learned so much by participating in this international event in Jordan.

“I will Inshallah try to win a gold medal in the next event for Pakistan.” She said.

“I am dedicating my bronze medal to the martyred Army soldiers in Balochistan and Waziristan who gave their lives for the country while fighting with the terrorists.” Saad Asif stated.

The brave show put up by our young taekwondo athletes in jor-dan deserves high praise indeed. Their brilliant show in the international championship will be inspirational for other young sportspersons who are aspiring to excel in their respective sports and are keen to represent Pakistan in the events abroad. -Fehmida Mirza

Every athlete of Pakistan who excels in sports at the national or international events is a role model for the whole nation. I am truly delighted at the junior taekwondo team’s superb effort in Jordan where they have won eight medals. – Arif Hadan

We congratulate our young athletes on their marvelous achievement!