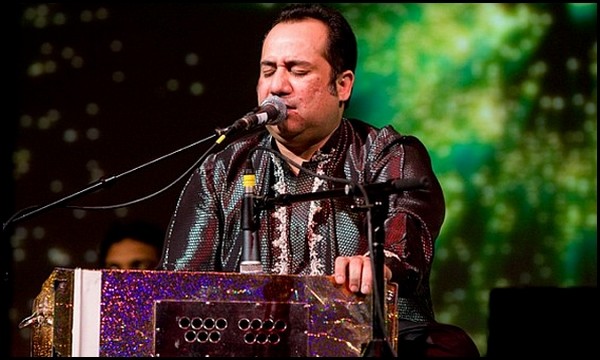 Rahat Fateh Ali Khan will be gracing the big screen with the upcoming romantic flick ‘Balu Mahi’! Other than the presences of our favorite showbiz Jodi Osman Khalid Butt and Ainy Jaffri we have got another reason to look forward to Haissam Hussain’s directorial debut film Balu Mahi – and that is the presence of ghazal maestro Rahat Fateh Ali Khan.

The great singing sensation of the subcontinent, Rahat Fateh Ali Khan, will make a cameo appearance in the film in the beautiful qawwali composed by musician Sahir Ali Bagga, confirmed the film’s publicist Umair Qazi to Brandsynario.

“The qawwali has an integral part of the story and goes perfectly well with the plot. Its significance has further increased with the presence of legendary singer Rahat Fateh Ali Khan who will make a cameo appearance in the song with lead pair Osman Khalid Butt and Ainy Jaffri,” he said.

He also added that the song has already been shot in Lahore. When we asked him about the film shooting progress he had this to say:

“We have currently shooting the first spell in Lahore and it will continue for around twenty days,” he added.

We believe that the classic qawwali will be shot at Hiran Minar near Lahore in Sheikhupura as a couple of days ago the team shared the images from the historical place.

Directed by Haissam Hussain of Daastan fame, the film has been produced by Sadia Jabbar of the successful TV serial ‘Mera NaamYousuf Hai’. The film is slated to release later in the year.