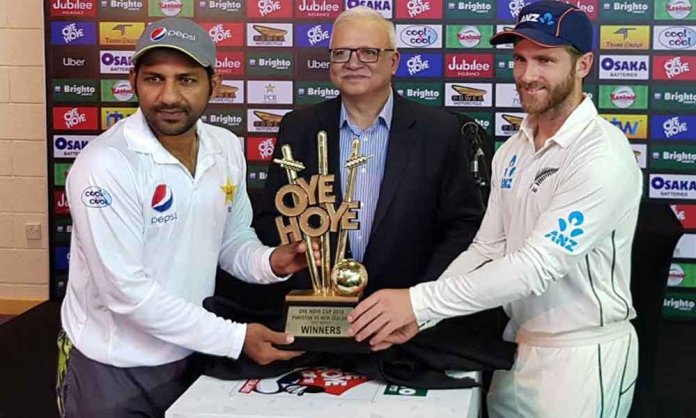 Cricket fanatics sheerly enjoy the moment when their favourite team lifts the trophy and brings it home. However, Pakistan vs New Zealand 2018 Test series Oye Hoye Cup did the complete opposite, instead of celebrating, Twitteratis trolled it viral!

Pakistan Cricket Board shared the official images of the trophy unveiling on their official Twitter. It did not take long for social media trolls to come out of their hiding holes.

Even ESPNCricinfo did not let go of the opportunity to use the Oye Hoye Cup 2018 trophy to amuse their followers on their Facebook.

you need to hire an artist who can design a trophy that befits the occasion of top level cricket. The sponsors are making these cheesy trophy which makes these trophies jokes;

@ISyedIWasHungry I thought they couldn’t top the freakin biscuit

Another hilarious trophy by @TheRealPCB

Names like OYE HoYE don’t bring much respect to this beautiful tournament. #PAKvNZ

Ring a bell? Dejavu feels? This also happened recently with Pakistan vs Australia T20I series 2018 when both skippers revealed the TUC Cup!

Even ICC could not stop itself from taking a dig at the ‘Biscuit Trophy’!

You vs the trophy she told you not to worry about. pic.twitter.com/DUGWKWFTbE

What are your views on the Oye Hoye Cup 2018 Trophy and TUC Cup?