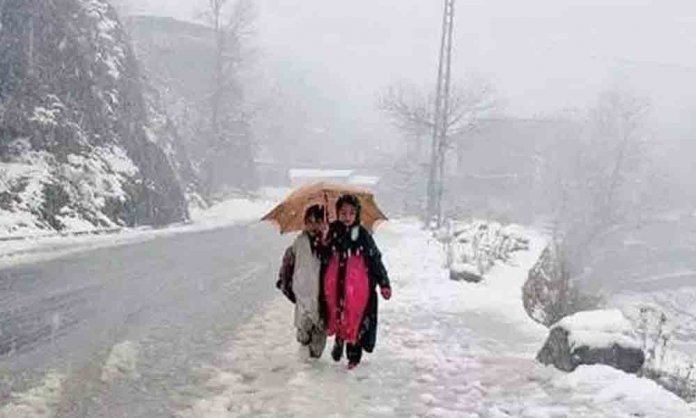 Pakistan Meteorological Department (PMD) has reported that the country will experience a prolonged period of cold weather this year due to maximum rains and snowfall in the Northern areas.

According to The Nation.pk, The Met Office has predicted that the temperature would drop to 5°C or 6°C in various cities during the spring season due to more rain and snowfall.

PMD spokesperson stated in the report:

This winter would witness coldest weather patterns as there were heavy rain spells and snow in the country.

The Press Release updated by the Met department on Wednesday says that above normal rainfall is expected throughout the country. The mountainous areas of Khyber Pakhtunkhwa, AJ&K and Gilgit Baltistan may receive above normal snowfall during the period.

More spells of rain in February and March are expected that would result in a continuous decrease in the temperature. The spokesperson of Met office said that different cities would also witness more fog, especially in Hazara division, Upper Punjab and Upper Sindh areas.

Heavy snowfall is also predicted in the Northern areas of the country including, Gilgit Baltistan, Murree, and Azad Kashmir. Moreover, spells of rain are expected to continue till May, resulting in cooler and pleasant temperature.

Azad Jammu and Kashmir witnessed persistent dry weather for over past two weeks that ended after a new spell of rain and snow in the region on Wednesday.

The weather turned colder in several regions of AJK including Mirpur, Muzaffarabad, Neelam and Leepa valleys, Kotli, Bhumbher, Rawalakot and other adjoining areas after a heavy thunderstorm in the state.

Kahuta, Haveli, Neelam and Leepa valleys received snowfall on Wednesday night whereas, in Mirpur, a new spell of rains with a windstorm of mild intensity started on Wednesday.

PMD has also predicted a continuation of rain in plains and snowfall in the hilly areas of Azad Jammu and Kashmir during next 24 hours.