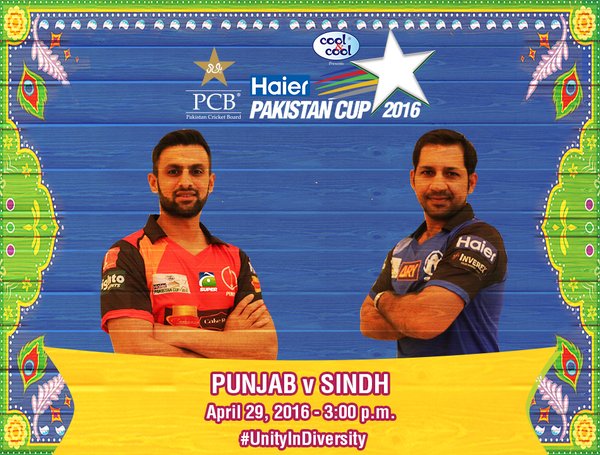 UPDATE: Punjab XI has qualified for the final match of Pakistan Cup 2016 by defeating Sindh with 5 wickets convincingly. Sindh won the toss and elected to bat first but whole side collapsed at just 158 runs in 46.3 overs. Punjab had to chase the small target in 35.2 overs to go to the final which they done easily in 28 overs for the loss of five

Sindh got into trouble early after losing first four wickets on just 35 runs; Ehsan Adil dismissed both openers quite early. It was Fawad Alam and skipper Sarfraz Ahmad who took the team total to 158 and rescued the side from a complete disaster. Fawad Alam scored 62 runs and with Sarfraz’s 40, both built up a partnership of 69 runs. Ehsan Adil, Zulfiqar Babar took three wickets each while Kashif Bhatti and Aamer Yamin both ended up with two, two wickets after their 10 overs quota.

Punjab openers Salman Butt and Shan Masood provided a solid start of 85 runs when Salman Butt got run out on after scoring 39 runs. Shan Masood played a responsible innings of 59 and in the end it was Rizwan that finished off the match with his 15* not out in 28 runs. Sohail Khan and Mohammad Amir sent four batsmen back to pavilions but was not enough for their side.  Shan Masood was given Man of the Match award.

Pakistan Cup Final 2016 will be played between KPK and Punjab on Sunday, Ist May in Iqbal Stadium Faisalabad.

In the 10th and last match before Final of Pakistan Cup 2016, Punjab and Sindh are facing off each other to be the second finalist of the tournament at Iqbal Stadium, Faisalabad. KPK XI has already booked their place in the final by winning 3 out 4 matches they have played in this championship.

Punjab has won only one match while Sindh has won two out of three matches it played so far. If Sindh XI wins, they will go through to the final directly, but if Punjab XI wins, the decision will be based on their Run Rate because three teams will be sharing equal points, including Balochistan.

Having Mohammad Amir (who took a 5 wicket haul in this tournament) , Imad Wasim and Anwar Ali in the side, Sindh has a decent bowling lineup. In the batting side, Captain Sarfraz Ahmad has to take the responsibility and players like Fawad Alam, Khalid Latif would have to perform well to secure their position for the final.

Punjab Xi will go for the kill because it is a ‘do or die’ situation for them and they can upset the opponent. On the points table, they are at number three, but they have given some good performances in the tournament.

As the tournament is heading to its end,  a huge crowd is expected to come today to Iqbal Stadium, Faisalabad.

The official broadcaster of Pakistan Cup 2016, PTV Sports is telecasting it Live for the fans in the country.