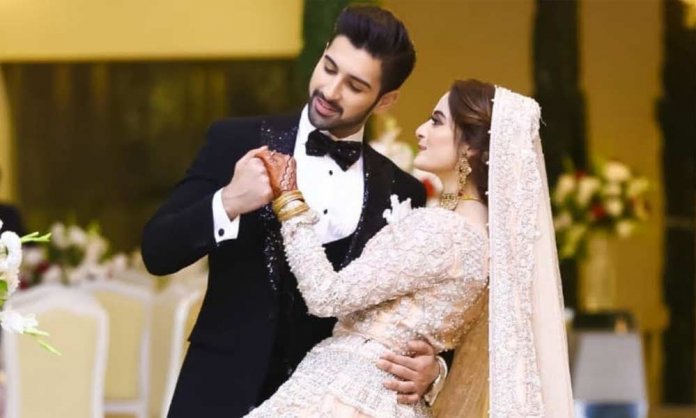 We all remember how Aineeb became the talk of the town in December 2018.

Many fans and followers were engrossed in admiring and idealizing Aiman and Muneeb’s flamboyant wedding festivities.

MASHALLAHHHH TO THEM! TBH AIMAN GOT THAT BRIDE GLOW YESTERDAY! MAY ALLAH BLESS THEM! ❤️❤️#Aineeb pic.twitter.com/V7drkFQcg7

On the other hand, many pointed out how it was absolutely unnecessary to spend such humongous amounts of money on ten wedding functions, when such a lavish wedding could easily have been avoided.

Does anyone know? How can we unsubscribe to all weddings? i-e: #Aineeb, #DeepVeer & #PriyankaNick?#ThankYou

Aimen and Muneeb also participated in a campaign against dowry around the same time.

That only gave people another chance to criticize them for an annoying display of ‘hypocrisy’.

So what that my own marriage functions were more than the days of a month and as lavish as it could get.#AINEEB pic.twitter.com/ktbOPtsWvZ

Back then, Muneeb broke his silence over the matter in an instagram post, where he claimed that his wedding expenditures were nothing compared to the amounts he spends on charity.

In his recent talk show, however, Waseem Badami brought the topic of their loaded, luxurious wedding back to the surface.

Making the same comparison, he asked Muneeb how their wedding expenditures were justified, especially in the light of the anti-dowry campaign they had advocated last year.

Badami’s point was that it all boiled down to the idea of spending money needlessly, be it the elaborate dowry parents arrange for their daughters or an overly-lavish wedding.

Muneeb’s response was different this time.

Instead of maintaining his stance about spending more on charity than he spent on the wedding, he simply stated that it is okay to spend elaborately on weddings if one can easily afford it, without it becoming a burden on them.

He condemns the idea of dowry because it puts an unnecessary pressure on the bride’s family, he added. But spending gladly and with one’s will is a different thing.

Do you think the public’s harsh remarks on Aiman and Muneeb were justified? And was Badamicorrect in saying that, be it dowry or over spending on a lavish wedding, it is essentially and equally problematic to waste money in amounts not needed?