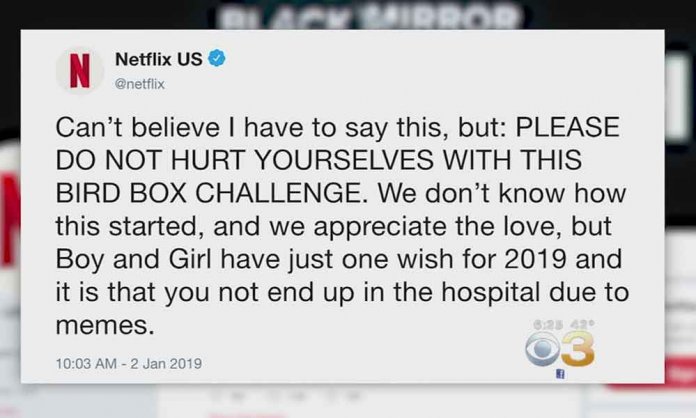 Netflix’s Sandra Bullock thriller film, Bird Box has created quite a stir on the internet since the day it got released last month.

In the first week of its release, over 45 million Netflix subscribers have watched this post-apocalyptic movie as claimed by the streaming giant.

The story of Bird Box follows the journey of a mother and two children as they try to escape from a mysterious force who kills by looking into the eyes.

Netflix’s Hack Now Lets you Control the App with your Eyes!

They have to discover a place that offers sanctuary but they have to embark on an adventure through woods and down the river that too totally, blindfolded.

However, things got intense when the fans of this blockbuster Netflix original started the #BirdBoxChallenge on social media.

The dangerous task requires people to do tasks completely blindfolded.

BIRDBOX 2018 The Internet iS Going Crazy About This One . Proud Of My Kids For Putting iN 💯 Effort To See That This lil Scene Play From The Movie #birdbox Came Out Great @alexislong6 @naijaboy_obi & Anaia . . #birdboxmovie #birdboxchallenge #birdbox2018 #birdboxnetflix #birdboxchallange

And the fans of Bird Box took their obsession to a whole new level!

And many of them suffered injuries as well!

After things got really intense, Netflix took to Twitter to warn the followers of this movie to not do the #BirdBoxChallenge anymore.

Can’t believe I have to say this, but: PLEASE DO NOT HURT YOURSELVES WITH THIS BIRD BOX CHALLENGE. We don’t know how this started, and we appreciate the love, but Boy and Girl have just one wish for 2019 and it is that you not end up in the hospital due to memes.

Appreciating the immense love from the followers, Netflix has requested them not to hurt themselves by performing this challenge which is trending all over the internet.

Referring to the character of the movie, Boy, and Girl, the streaming giant said that their only wish for 2019 is that you don’t end up in the hospital due to memes.

Directed by Susanne Bier, Bird Box got released on 13th December 2018 and proved to be a massive success.

Watch the trailer of Bird Box below!