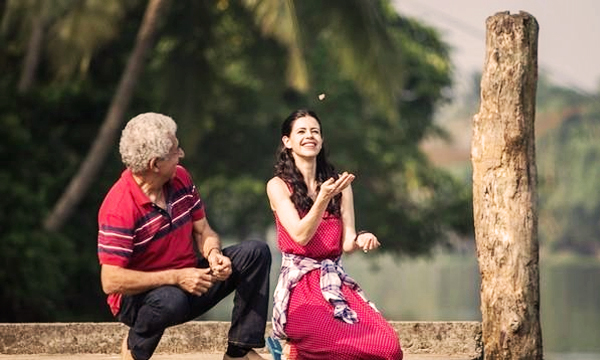 The latest Bollywood Movie ‘Waiting’- a 98 min Bollywood movie is an unmissable journey of two strangers who spark along in this sunshine of a movie. The film revolves around two people waiting for the passing life, everlasting love, proximate loss and agony of their loved ones, exhibiting a really delicate plot.

The movie featuring the veteran actor Naseer-u-ddin Shah as Shiv and dilettante Kalki Koechlin as Tara portrays an important message of human bondage. Starting the plot with the most difficult journey, the movie showcases two different couples with a vast age difference who meet at the Kochi hospital.

Both, Naseer (a professor), whose wife is in the coma since eight months and Kalki (newly married), whose husband is suffering from some severe death-bed injuries from a road accident are fiercely counting days and nights in the hospital for their loves to wake up.

Exhibiting the emotions of love, empathy, distress, frustration, agony, human bondage and tireless hope, the movie distinguishes itself from every other Bollywood genre. Produced at a low-budget cost, the movie discloses a sensitive topic with many emotional holocausts, and irresistibly spontaneous moments that are hard to avoid. Co-written and directed under the name of Anu Menon, the film ‘Waiting’ also features some prominent supporting cast including Suhasini Mani Ratnam, the wife of the professor (Naseeruddin Shah), Anuj Mathur (Kalki Koechlin’s husband) and the Rajat Kapoor as a doctor, who communicates the grief-stricken news of their loved ones with complete professional possession.

Watch the movie Waiting Trailer below:

On the other hand, some of the best scenes from the film are when both Kalki and Naseer-u-ddin Shah are silent, deep in thought about their feelings and then share what it’s like to be on the opposite ends of the age spectrum.

The movie has been shot at some beautiful locations- another plus point for the movie.

Both Naseer and Kalki’s performances in the movie are very persuasive keeping the audience eyes’ constantly glued to the screens. Now, it all depends on how people accept the story line.