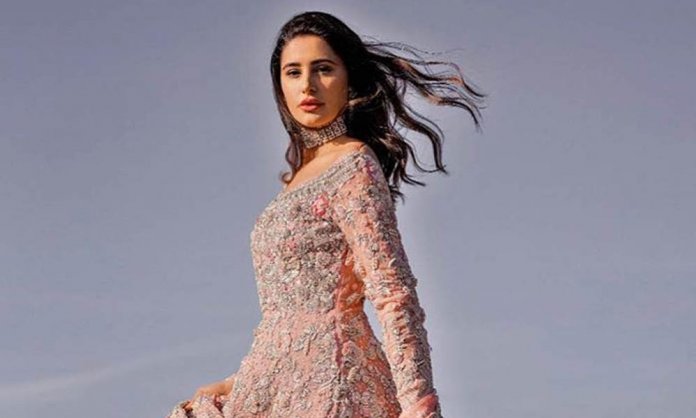 We must say, she looks drop-dead gorgeous in a heavily embellished dress and we just couldn’t stop drooling over her.

The actress did the photo shoot for Sunday Magazine’s wedding special issue and she surely did justice to Ansab Jahangir’s beautiful outfit.

The pictures have been unveiled by the designers and are now doing rounds on social media.

The caption reads as:

Here it is the exclusive first look at the #AnsabjahangirXNargisfakhri collaborative- Representing the aesthetic we aspire towards Nargis stuns in an ansab jahangir bridal ensemble resplendent with a blush pink kalidaar heavily embellished with Swarovski stones , resham and Japanese beads paired with a metallic organza lehenga.

Have a look at the pictures!

Well, we are totally drooling over her outfit!

We just cannot take our eyes off her here!

She surely made such an amazing bride!

Two days before the shoot was unveiled, Nargis Fakhri took to her Instagram account and teased her fans by saying that she has really something exciting coming up with the Pakistani designer.

Have a look at her video!