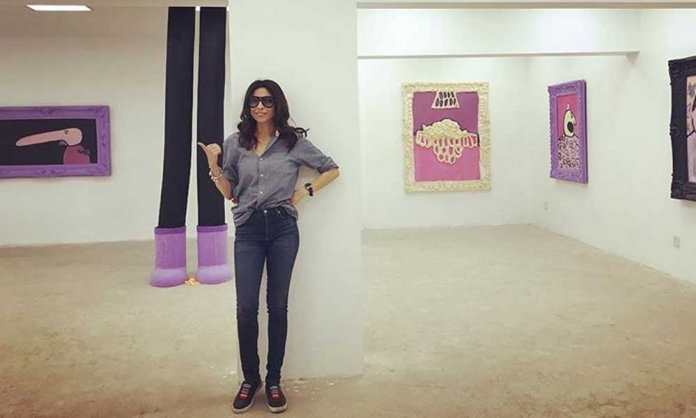 Meesha Shafi has an eye for talent, after all, she is a successful artist herself.

Shafi made her film debut with a supporting role in the 2013 Mira Nair’s film The Reluctant Fundamentalist.

Meesha had retweeted a tweet of Pakistani artist Umair Najeeb Khan who has promised to do 20 giveaways!

Umair is a 25-year old artist from Karachi who designs, illustrates and animates all kinds of artwork.

His work has also been praised by filmmaker, video producer, musician, and animator Zeeshan Parwez.

These are absolutely wonderful ! Great job. @fruitavitals please take a look at these.

He has recently done an animated music video called Jhoomta Raha which is first of its kind in Pakistan for a local musician Assad Hasanain and has illustrated artwork for children’s books.

I illustrated and animated for @LeftArmAround’s beautiful song Jhoomta Raha.

The song is out. Link in the thread ⬇️ pic.twitter.com/dLWYztWUxU

Some of Umair’s well-known and notable works include designs for commercial feature films Chupan Chupai, Pinky Memsaab, Kataksha, and Ready Steady NO!

Umair wishes to bring change in how we brand and design in Pakistan with fresh content.

His latest project on beverage packaging comes with the same aim, a combination of cultural art, diversity, and a fresh approach for brands.

Wanted to mix my illustration and design skills to celebrate the diverse culture of Pakistan.

Let me know what you think! pic.twitter.com/Zi7p81VgMB

Umair wishes to represent and to celebrate all that Pakistan and its diverse set of people have to offer through his artwork. He wants to design for Pakistan and not just for Pakistanis in particular.

He has done work for corporate and food brands as well.

Umair is one of the many artists who have shown how much talent exists in Pakistan. Artists like him want to bring a new wave of ideas and concepts to the world of advertising.

We hope that they find the platform they need to surplus and become a part of the advertising universe.