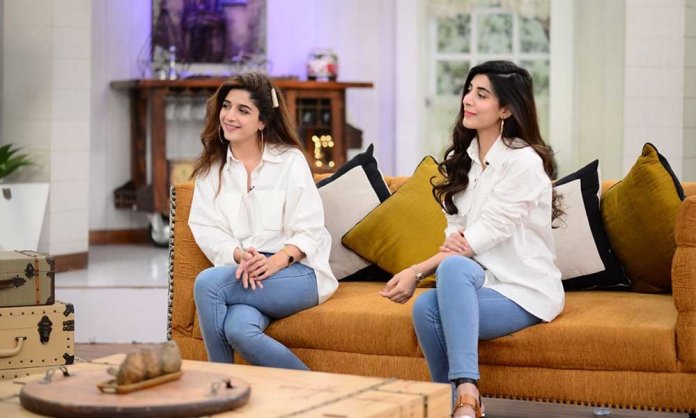 Nida Yasir remains in the news on and off for the kind of topics she discusses on her morning shows and her comments on the same.

However, this time, two of her guests have stirred up a storm on social media: The Hocane Sisters.

On August 5th, 2019, Nida invited the Hocane sisters to her morning show. It seemed that their main focus as guests was to advertise their garment collection, however, what has stolen the audience’s attention was the sisters’ comments on mental health.

While discussing diet and healthy eating, Urwa mentioned how the wrong kind of food is the sole reason for any kind of mental illnesses.

Look at what people have been saying about it since then.

Many are calling the Hocane Sisters’ Comments the height of ignorance.

Height of ignorance. Depression and other mental illnesses have several causes, such as trauma, genetics, environmental triggers etc. What you eat is NOT the only thing that causes Depression. Urwa and Mawra, please do your research before saying such statements https://t.co/MS6w0Y0zGn

Many are saying one shouldn’t speak publicly about something unless they have ample knowledge on the subject.

Urwa and Mawra's comments belittling mental health were problematic af but they are simply reflective of our general attitude.

As a general rule of thumb, it is never wise to talk about something authoritatively that you have not experienced yourself.

And many are blatantly calling it plain stupid.

You cannot go and say this stuff. Even if you're well-meaning and wanted to warn people about junk food and promote healthy eating.

Junk food is not what causes depression ffs.

Some have even titled the sisters as the Dumbest Stars of Pakistan.

aren't the celebrities aware of their position and the kind of influence they could have on people? Mawra and Urwa continue to be the dumbest stars of Pakistan

Many are urging the stars to accept their mistake and apologize.

Food does play a part in everything inside our body but it was wrong to say that it all depends on what you eat.
However, mistakes can be made by anyone. What's more worrying is this response of yours. How much would it take to accept your mistake Mawra? I thought u were better.

However, it does not look like they regret what they said at all as, only a few hours ago today, Urwa retweeted a Paulo Coelho quote with her own comment.

The quote implies that there is no need for offering explanations to people as people will only hear what they want to hear.

The rage against them continues to rise, let us see if they continue to hold the same stance or not.