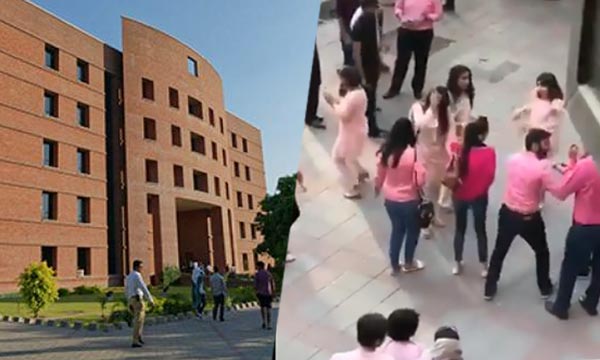 Students of Lahore University of Management Sciences (LUMS) have found themselves in the eye of a social media storm after an inside video went viral on the internet.

The 10-sec clip showcases LUMs students donned in pink and grooving to a tune inside the university’s premises.

All hell broke loose on social media after the video made its way on the internet.

Komal Aziz Got Supsended from IBA & The Reason Will Surprise You!

Apparently, the students were celebrating ‘Pink Day’ in the university and were dressed as per the theme of the event.

The video has ignited a fiery debate and consequently, #LUMS started trending on Twitter.

Throw these shits out of this institution or ban #LUMS which produce nothing but garbage pic.twitter.com/OoEgbk6bp2

Keyboard warriors were quick to protest against LUMS students dancing during the holy month of Ramadan.

What's the hell is this???
Is this the University of Islamic state?????😡😡😡😡 pic.twitter.com/jwrc2EovMU

Idk why people are defending and countering it with rape cases and other criminal activities.
We should all condemn this dancing or whatever in the Holy month of Ramadan
You can’t just say it’s alright looking at other impurities in the environment…. pic.twitter.com/SG2WmXEv6T

The rest defended LUMS and claimed that the clip was harmless.

You can’t justify the dancing, not in ramazan. No matter how liberal/secular you are. #LUMS

The only problem with the LUMS video going viral is how bad their dance moves are!

The video of #LUMS students dancing, which has started trending on social media is a typical example of what we call moral panic. The country is literally burning, and some fools are worried about a few kids having a bit of harmless fun. 🙄

Many highlighted that there are far worse problems that social media should be worrying about.

There are actual problems in Pakistan. You know: poverty, illiteracy, severely imbalanced civil-military relations, circular debt. I could go on but the point is just to simply say: what kind of people exist here that thought students dancing at LUMS was actually a "problem"?

Is there a law which says not to dance? There’s definitely one against stalking and sharing someone’s images online without their consent.

Looks like LUMS is surviving and keeping its freedoms even through the onslaught of continuous moral policing, intolerance and misogyny. https://t.co/Tu3dhdV6mB

Those who are trending #LUMS and talking about the dance video and associating it with Ramadan. Well I would just say one thing. In this Ramadan let people live their lives and let Allah only judge people. Stop being Gods 🙏

Last month, LUMS came under fire after a ‘sexist’ Facebook group of LUMS male students and alumni got exposed.

It was reported that the group circulated ‘misogynistic’ content and prompted its students to protest in front of the Office of the Student Affairs at the University, to take action against the group and students involved.

Later LUMS released a statement to ensure that it promotes” mutual respect’ and will “sensitize the community at large on gender issues”.

What do you have to to say about the LUMS video going viral? Let us know in the comments below.