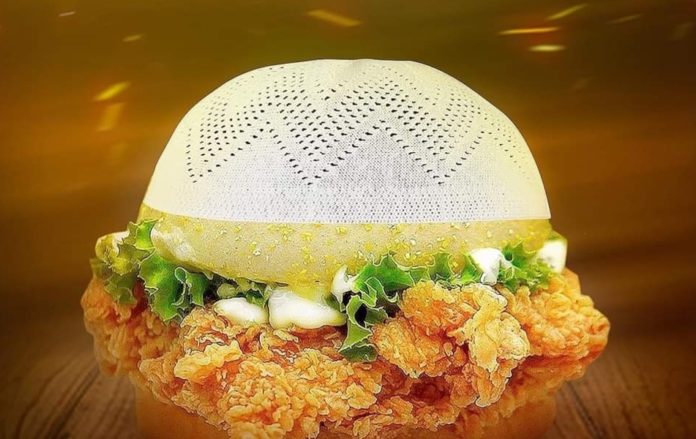 A local burger joint has taken its marketing strategy to the next level by effortlessly taking a dig at an Indian movie.

Bollywood’s upcoming movie ‘Mission Majnu’, which is soon to hit Indian cinemas features Sidharth Malhotra. The movie follows the story of an Indian man who comes to Pakistan as a spy. While the movie is based on true events, what’s not true is the portrayal of Malhotra as a Muslim in the movie.

While donning a typical look, Sidharth is seen wearing a white cap with thick Kohl in his eyes – something we have seen in Indian movies for decades now. However, we know that this is not how it’s done in Pakistan, and it’s high time that Indian directors try to soften and open their eyes to the actual outlook of Pakistani men.

The burger joint ‘Cheezious’ revamped its burger with a look as seen in the movie trailer. Calling out the burger an atom bomb in reference to the film, the restaurant has caught the eyes of the customers. Not just with the launch of a delicious meal but also with the hilarious take on the upcoming Indian film.

The audience’s reaction to the hilarious post has been screened below. Many were amused to find the reference while others asked the burger joint to add some kajal to give an extra touch to the burger.

Take a look at some of the comments below.

What are your thoughts on the dig? Share them in the comments below.