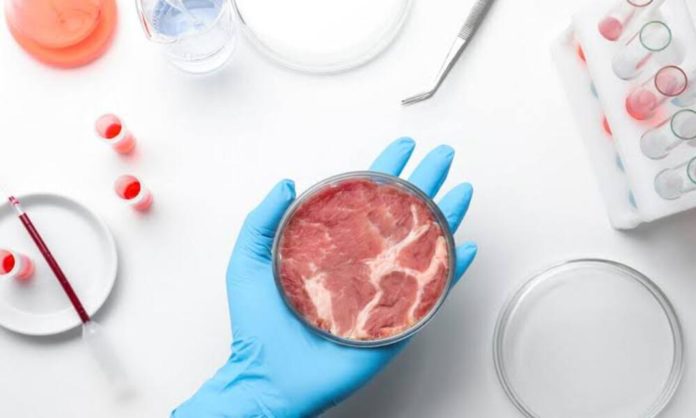 Companies across the world are moving quickly to bring to the market hamburgers and other meat products that are grown from animal cells in a lab.

Lab-grown meat replicates the taste and consistency of traditional meat. Many expect the move to the lab will especially appeal to people concerned about the role land-based animal agriculture has in accelerating climate change.

However, as investments and research ramp up for lab-grown meat. More people are debating the environmental and health implications of widespread production of alternatives.

According to Uma Valeti, founder and CEO of Upside Foods, “Cultivated meat is real meat grown directly from animal cells. These products are not vegan, vegetarian or plant-based — they are real meat, made without the animal.”

“The process of making cultivated meat is similar to brewing beer, but instead of growing yeast or microbes, we grow animal cells,” Valeti added.

Is Lab-Meat The Answer To Carbon Footprint?

Some researchers speculate about the dependence on the efficiency of the production process. The rise of the cultured meat industry could actually make climate change worse than traditional beef production. One issue is the longer lasting impact of carbon pollution versus methane gas pollution.

“Lab meat doesn’t solve anything from an environmental perspective, since the energy emissions are so high,” said Marco Springmann, a senior environmental researcher at the University of Oxford.

Meanwhile, David Kaplan, a professor of biomedical engineering at Tufts University is quite hopeful about the environmental prospect. He says, “The presumption is we’re going to do better because of the sustainability element here — to reduce the land footprint, reduce the water needs and reduce some of the waste streams that go out from feedlots.”

How It Is Developed?

Development of cultivated meat works on the principles of tissue engineering. A process in which a whole tissue is developed with the help of cells. Biopsy is taken from animals as cells are harvested from the tissue. Followed by the selection of cells, a list of vital minerals and nutrients are identified to help the cells recieve the desired nutrients for their growth.

Those cells are then placed in a nutrient bath in a bioreactor. It is a large stainless steel vessel which agitates cells under a particular pressure. While creating an environment that allows cells to grow efficiently and safely. The cells takes roughly two weeks to grow. Before it is converted into a finished product be it a burger patty or a nugget.

As companies continue to develop their alternative meat products they’ll likely face increasingly climate-conscious consumers or stricter regulations on emissions as the planet warms. This could encourage the growing industry to use cleaner energy and technologies for cultured meat, researchers say.

Read More: 7 Easy Food To Make If You Don’t Like Qurbaani Meat