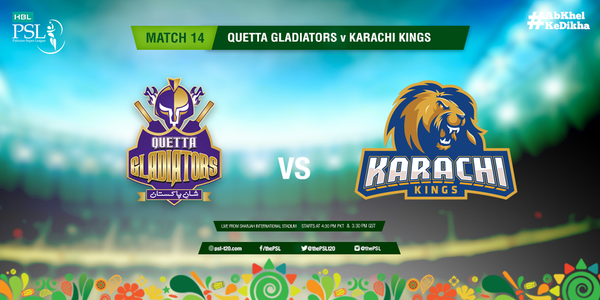 UPDATE: Quetta Gladiators has sealed the victory against Karachi Kings in a low scoring match by 5 wickets. Karachi Kings winning the toss and elected to bat first, could score only 126 runs of their 20 overs that were chased down by Gladiators . Ahmad Shahzad’s 41 runs and Sarfraz Ahmad’s 29* guided them to a comfortable victory in the end.

Grant Elliot proved to be a real star for Gladiators who took four wickets giving away just 15 runs (15-4) and received man of the match award.

Karachi Kings and Quetta Gladiators are going to play their second match of HBL PSL T20 2016 in Sharjah Cricket Stadium.

Last time when both sides appeared against each other, Gladiators emerged victorious and they still have a psychological edge over the opponents, but they have to find out a solution to tackle Ravi Bopara in the batting line as well as the bowling.

Karachi Kings have been continuously rescued by Ravi Bopara who is in excellent shape, acing both, the batting game and the bowling. If Gladiators get him out early and play him sensibly, they can avoid the damage he can cause.

Both sides have won their last match played in this league so they are relief for this match and can play this match with ease and comfort.