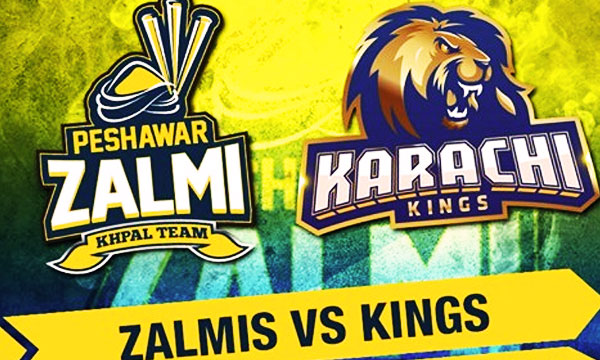 UPDATE: Peshawar Zalmi just managed to get a 3 runs victory over Karachi Kings in a very close contest in Sharjah Cricket Stadium.  Zalmi winning the toss and batting first, set up a fine total of 182-4 in their 20 overs by Hafeez’s 50. In reply at one stage Karachi Kings were 40-5 but made comeback in the game by Ravi Bopara’s 67 runs of just 34 balls. In last over just 13 runs were required and it came down to just 5 on 4 balls, but Darren Sammy defended it in the end.

Muhammad Hafeez was given Man of the Match award.

Karachi Kings and Peshawar Zalmi, two favorite contenders of PSL T20 2016 are up against each other today in Sharjah Cricket Stadium.

It is the first time both these teams will have a faceoff and both will be playing their first match in Sharjah. The experience of Shahid Afridi and some senior players like Hafeez and Tamim Iqbal might come into use for Zalmis because they really need to score high, no matter if they bat first or chase a total.

The pressure will be high for the Kings who, after getting a victorious start, could not do well in their last two games of PSL T20 2016. Shoaib Malik is leading a relatively younger side but they have enough potential to give a tough time to Zalmis. The likes of Imad Wasim, Mohamamad Amir, and Usama Mir can change the situation anytime and turn the game in their favor.

A lot depends on the right team selection and utilization of sources; also how these seasoned captains lead their sides from the front.

Replay: that o/ moment as seen from the stands. pic.twitter.com/f1Mce7RREF

Huge wicket for the young star as he hoodwinks the @KarachiKingsARY captain and has him caught in the deep!