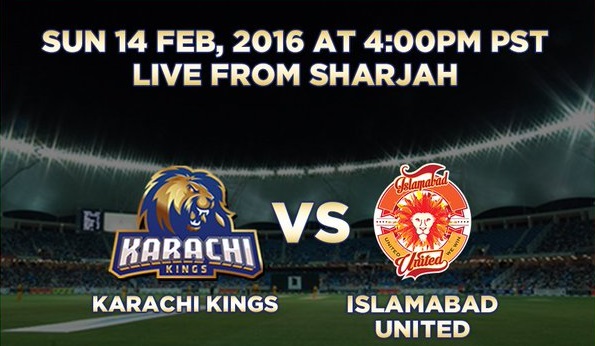 The 16th match of the PSL T20 2016 will be a tough battle between Karachi Kings and Islamabad United today in Sharjah Cricket Stadium. The winning side will pave its way to qualify for the playoffs.

Kings and United are having equal points on the table and stand on the 3rd and 4th position respectively. Both these sides are struggling with lack of consistency in performance that has cost them defeats in the previous matches.

Shoaib Malik of Karachi Kings has been impressive and has made his team fight for victory but the results are not that satisfactory so far. A few changes have been experimented in the last two three games but they have not clicked.

On the other side, Captain Misbah is back in the United team but the all rounder Andre Russel is a big blow for the team Islamabad United who was already suffering from injuries. Secondly, their batsmen must keep the run rate up in middle and final overs; they get a good start often from their openers but they fail to convert it into a big score.

As it’s a day match (first one), toss will not be that crucial as it is in the evening matches because of the dew.