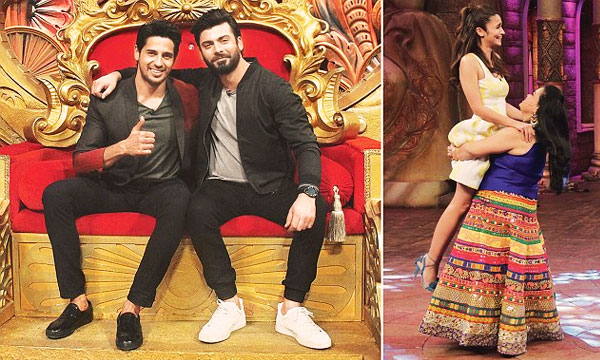 The popular trio of Kapoor and Sons, Alia Bhatt, Sidharth Malhotra and Fawad Khan recently appeared on the sets of Comedy Nights Bachao, slated to be aired on Colors Television soon.

Comedy Nights Bachao, a replacement for Kapil Sharma’s most trending and popular Comedy Nights with Kapil is a show full of laughs, gags and the hottest gossips.

So hold on to your horses and be ready to laugh your heart out with Comedy Nights Bachao’s much- awaited episode starring the Kapoor & Sons team.

The hosts of the show, Krishna and Bharti, much loved and adored by the public just like Kapil Sharma added much fervour and fun to the show. The peppy trio, Alia Bhatt, Sidharth Malhotra and Fawad Khan sure seems to be having great fun on the sets; the actors seem to be all in the mood, having some great chuckles. CNB invites stars and celebrities on their sets every week. This time, it was the trio team of K&S, who appeared on the sets on CNB for the movie promotions.

Looks like the three of them had loads of fun on the sets! The show will be aired soon on Colors TV!