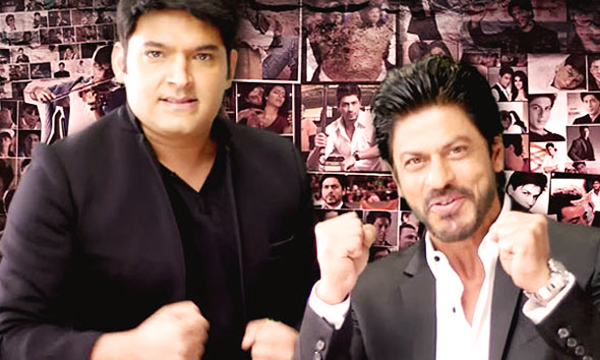 All time favorite B-Town actor Shah Rukh Khan appeared as the first guest on the Kapil Sharma Show to promote his upcoming movie ‘Fan’ slated to release on April 15th, 2016. The special episode of the show featuring Shah Rukh Khan was shot on Monday at the Indira Gandhi Stadium in Delhi and will be aired on April 23rd on Sony Entertainment Television.

If we talk about Kapil Sharm’s Show, the first thing that comes to mind is a lot of humor, mocking, giggling, entertainment, and loads of fun. Well! The comedian has assured all these aspects are perfectly showcased in the new show as well.

A fun filled promo video for the show is released. Watch video below:

We do remember how Sunil Grover of Comedy Nights with Kapil had fun with SRK when he appeared on the show to promote Dilwale; a funny clip of Gerua by Sunil Grover sent every one into hysterics.

The first episode of the show started with a grand entry of Kapil Sharma through the crowd. Kapil marched in towards the stage singing a beautiful song ‘Ankhon Ke Saagar’.

Both Kapil and his team including Sunil Grover, Ali Asgar, Kiku Sharda, Sumona Chakravarti and Chandan Prabhakar maintained the popular liveliness and fervor associated with their show.

Watch another promo video below:

The surprise element of the show was not just Shah Rukh Khan, the new show exhibits new characters this time. So, the chanting of the audience for Dadi, Palak and Gutthi was of no use. All the characters in the show came out with a complete new get up and made the audience laugh out loud!

@KapilSharmaK9 Show is super duper . Welcome back sir . It was amazing to be part of launching show . All d best pic.twitter.com/RNBQgyKX9d

All of us remember Sidhu Paaji (former cricketer and BJP leader Navjot Sigh Sidhu). He was the only one who looked unchanged from the sets of the previous show. Sidhu will still appear as the permanent guest on Kapil Sharma’s new show. He was joined at the venue by BCCI secretary Anurag Thakur.

The show was followed by some humorous acts by both Kapil and Shah Rukh who was there to promote his upcoming movie Fan. SRK even shared his childhood memories on the show with the audience.

The show took a twisting turn when Sunil changed his get up and appeared as Gaurav on the stage, SRK’s fan from the movie. He started dancing on the song Jabra Fan and was joined by Shah Rukh and the audience.

The new show lives up to the same amusement and entertainment in their first episode and expected and promises to bring a lot more in the upcoming episodes.

Filmfare Awards 2016: SRK vs Salman – Who will Host with Kapil Sharma?