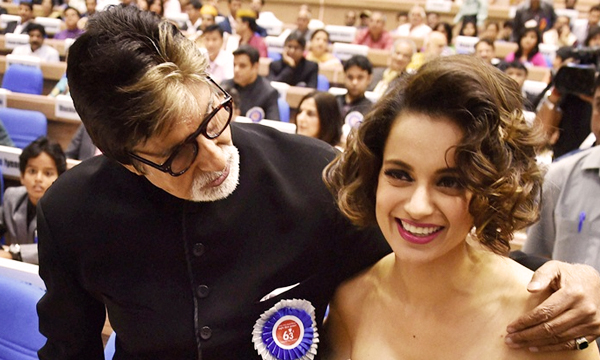 Just after a day from Kangana’s 28th birthday, she was awarded the National Awards for her film Tanu Weds Manu Returns; she received the award from President Pranab Mukherjee. The actress wore a strapless icy-hued classic bob style attire. Kangana’s third National Award in line. She has already won the awards earlier for her films Queen last year and Fashion in 2008.

Amitabh Bachchan, on the other hand, was accolade with the award for his film Piku. The legend was accompanied by his wife, son Abhishek Bachchan and his daughter-in-law Aishwarya Rai Bachchan. This is Amitabh’s fourth National Award in line; his first award was for the best actor in Agneepath in 1990 while his second and third awards were for Black and Paa in 2005 and 2009 respectively.

Both Kangana Ranaut and Amitabh Bachchan were seen hugging each other for their best win. Meanwhile, Sanjay Leela Bhansali also received the best direction award from President Pranab Mukherjee at the award ceremony. Other winners were Kalki Koechlin and Marathi actress Rinku Rajput, the most popular film Bajrangi Bhaijaan, the best supporting actress Tanvi Azmi and many others who bagged the National Film Awards this year.

It is noticeable here that the National Films Award’s list was announced on March 28th, but the award ceremony was held on May 3rd in New Delhi.