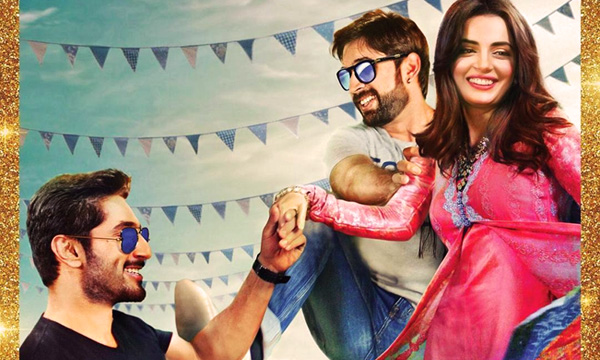 The upcoming romantic comedy flick Janaan is all set to release on Eid-ul-Adha. If you have gotten too excited after reading this then hold your horses because the movie will be released internationally – in six countries namely UAE, England, USA, New Zealand, Australia and Malaysia.

ARY Films, that is handling the distribution of the movie in Pakistan has joined hands with B4U Movies, a Bollywood movie digital TV channel, for the international distribution.

“ARY Films is distributing the film in Pakistan, whereas they’re collaborating with Bollywood’s B4U Movies for international distribution as well. Janaan will release in the entire UAE, England, USA, New Zealand, Australia and Malaysia. And we are also in negotiation with a release in Iran, Turkey and Morocco. I think it’ll be the only Pakistani film so far to be released in more than six countries (hopefully),” Janaan’s producer Imran Kazmi said while speaking to HIP in Pakistan.

With two of the most beautiful ladies!! 😀

While dishing out further details, the producer said Janaan will be a visual delight as its editor Mitesh Soni has worked for ‘Yash Raj Films’ team and has Jab Tak Hai Jaan and Dhoom 3 to his credit.

He added that the team is currently in Thailand for the final patchwork of the film, which include sound, editing etc. “The director, Azfar Jafri, co-producer, Munir Hussain, CEO ARY Films, Jerjees Seja and I are currently in Bangkok, Thailand for the post-production. Ninety percent of the film’s work has been done, and we’ll be done with the whole film within the next ten days, after which we’ll start the pre-production of Parchi and other projects of IRK Films.”

The movie Janaan features Armeena Rana Khan, Bilal Ashraf and Ali Rehman Khan in the lead roles. Penned by Osman Khalid Butt, the film breaks the stereotypical image of pakhtuns and celebrates their culture and values.

We hope the film does well at the box office. Janaan is releasing internationally so let’s keep our fingers crossed that it matches the international market standards.