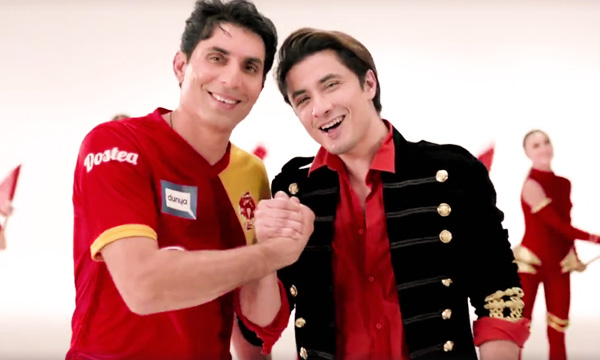 After roping in megastars like Ali Zafar and Fawad Khan, Islamabad United (ISLU) has further amped up fans’ anticipation by finally releasing its official anthem ‘Chakka Choka’, sung by the rockstar Ali Zafar.

With only a few days left to the official commencement of PSL 2016, ISLU, with the logo ‘United We Stand’ has come out with the anthem, #MilKerJeetainGe by Ali Zafar; this further enthralled the already excited fans. As if the team already didn’t do enough by roping in Fawad Khan and Ali Zafar, the latest upbeat ISLU song.

Watch the official song video of ‘Chakka Choka’ below:

As if the team already didn’t do enough by roping in Fawad Khan and Ali Zafar, the latest upbeat ISLU song filled the fans with energy. Ali Zafar’s has mesmerized the listeners with his rockstar voice; reflecting the very spirit of the team, Islamabad United.

Islamabad United has already gained major popularity as there could have been no better choice other than the star package of Fawad and Ali. Both the celebrities have been incredibly successful as singers and versatile actors, domestically and internationally.

Preparations for the launch ceremony of PSL are on the rise while the franchise owners are immensely buoyant. the PSL 2016 is to start from February 4th, 2016. Are you excited?