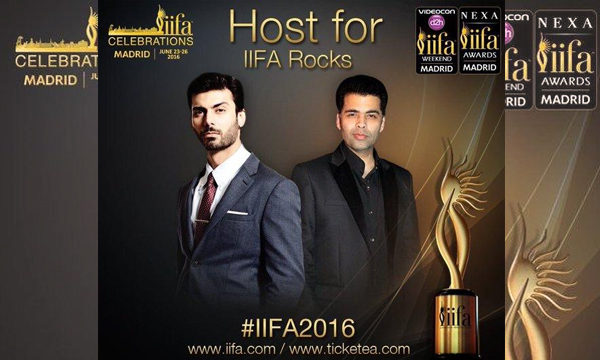 The Pakistani heart throb Fawad Khan is all set to become the very first Pakistani to host the grand IIFA Awards 2016 alongside the veteran Bollywood filmmaker Karan Johar.

Interestingly, the event’s poster was released a short while ago. And  on it the KJO-Fawad are seen dressed in stylish suave attires. Needless to say, they look quite smart indeed. IIFA Rocks 2016 is one of the most popular Indian Awards Ceremonies held annually; Fawad Khan will be hosting a segment of the show alongside his mentor Karan Johar in Madrid. The show is going to be part of the IIFA Weekend, showcasing power packed performances by Parineeti Chopra, Kanika Kapoor, Pritam and others.

With only a few weeks to go, the IIFA Rocks tickets will be up for grabs tomorrow! Get ready to book your seat on www.iifa.com #iifa2016 #booknow #iifarocks #ticketsforsale #grabnow

The hosts for the grand event will be Shahid Kapoor and Farhan Akhtar. Fawad Khan was the host to the LUX Style Awards 2015 with Mahira Khan.

Our Raju and Pappu are ready to rock the #IIFAMadrid2016 stage. How excited are you? Save the date & book your tickets to see them live: http://bit.ly/1VIIFAtix #iifa #iifa2016 #shahid #farhanakhtar #awards #night #entertainment #booknow #bollywoodfans #bollywood #bestduo #hosts #pair #magicians #artist

Way to go Fawad. You will definitely make us proud!