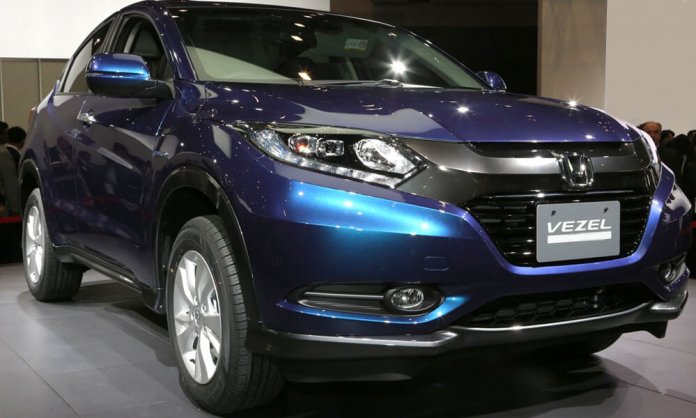 The Honda Vezel, popularly known as Honda HR-V, was introduced in the Japanese markets for the very first time back in December 2013.

This year, the SUV will mark 5 years of success and the brand has decided to mark it in style by introducing the all-new HR-V Sport variant.

Expected to be more aggressive in looks as compared to its predecessor, the features will also be more aggressive and prominent, including the dedicated front grille, fog light and lower body garnish, black side mirrors, 18-inch alloy wheels, chrome exhaust finisher and stainless steel sports pedals.

Honda is also said to be planning to introduce an even more powerful 1.5-litre turbocharged engine from the Civic stable for the Honda Vezel Sport. As of now, the L15B engine that churns out 170hp and 220 Nm torque in a JDM Honda Civic.

According to a Japanese publication, the brand is currently working on introducing the second-gen model at a fast pace due to the competition the Honda Vezel Sport will receive from its rival Toyota’s C-HR, expected to launch in second-half of 2019.

The Vezel is expected to launch in December 2019.

Toyota to Hop on the Android Auto Bandwagon: Report

Choosing the ‘perfect’ car can be difficult! Especially when the cars are very similar to one another like the Honda Vezel or HR-V.

Well, if you wanted to buy the car, then you may want to check out the leaked image of the crossover’s new look.

The Honda Vezel was launched by the company back in 2013-14. The new crossover is a facelift variant of the car, giving it a fresh look, which was needed sooner or later. Even the Vezel and HR-V are more or less the same thing with different powertrains.

The image seems to be taken from a Japanese brochure (magazine) or newspaper.

Looking at the image, we can observe that there are minor aesthetical updates and the vehicle is similar to Honda’s current line of vehicles; the Accord and Civic.

There’s a thick chrome strip going horizontally at the front end is similar to many other Honda vehicles. The black grill, as well as the shape of the front bumper, has also been updated, as the grill is wider, deeper and more pronounced.

That’s not all, the black accents that hold the fog lamps have become bolder and kind-of squarish while the previous ones were comparatively narrow and sleek. The slot in the bumper itself between those fog lamp housings has become wider and also angular. The front splitter has also been redesigned. And you now get a full LED headlights as well.

There is no confirmation when the facelift will be launched in Pakistan.