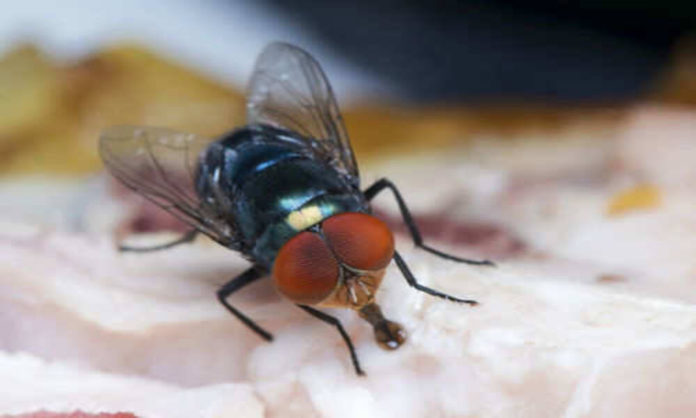 Common houseflies are known to be more than just annoying creatures. Their capacity to cause disease in humans is worse than we think. Since they have no teeth, they eat by slurping fluids through their nose.

Once they land on solid food, they spit their saliva on it. The saliva liquefies the food for them to drink. They feast on nasty things like faeces and rotting meat, which can be teeming with harmful, infectious bacteria. This bacteria can get in and on the fly.

The fly can then transfer the bacteria from its food to humans. It’s believed that flies can transmit over 65 diseases to humans. These diseases include typhoid fever, cholera, and tuberculosis.

For a long time, the studies conducted were focused on biting flies who are known for leaving diseases in the bloodstream. However, according to the latest research non-biting flies vomit is considered a far greater risk to human health.

“I’ve been working on synanthropic flies since I was a graduate student in the 1960s,” says study author John Stoffolano, professor of entomology at UMass Amherst’s Stockbridge School of Agriculture, in a university release.

“And synanthropic flies have largely been ignored. Blood-feeding flies have taken the limelight, but we should pay attention to the ones that live among us because they get their nutrients from people and animals that shed pathogens in their tears, faeces and wounds.”

How Flies Spread A Disease?

When a fly touches down on the food, that’s not the only thing it touched that day. Flies often sit on stuff, like a dumpster or decomposing food, that’s full of microbes. The germs can hitch a ride and, if the fly stays put long enough, hop onto your meal. This is much more dangerous than their saliva because some of the microbes can cause diseases. Once the housefly feeds on anything it fills its crop.

“The crop is like a gas tank,” Prof. Stoffolano explains, “a place to store food before it makes its way into the digestive tract where it will get turned into energy for the fly.”

The crop of the fly intends to store a large amount of food without having to neutralise any of it since it lacks digestive enzymes. Hence, reducing the incidence of killing harmful pathogens.

Researchers have deemed that this topic is currently understudied and requires extensive knowledge to study the behaviour of houseflies and how they can spread disease from one to another.

The incubation period, the proliferation of harmful pathogens in the gut and the disease-carrying capacity are some of the things which need to be understood.

According to Prof. Stoffolano, “It’s the little things that cause the problems, our health depends on paying closer attention to these flies that live with us.”

Read More: 10 Quick And Easy Snacks That Can Help You Lose Weight