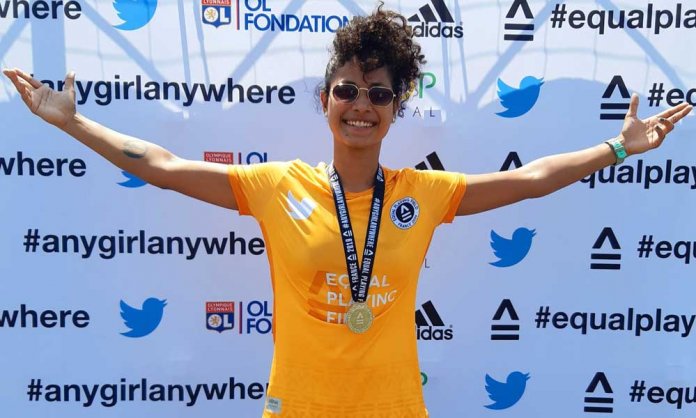 Hajra Khan, Pakistan’s Football team Captain, has once again made the nation proud as the talented sports-star just bagged her third Guinness World Record in France!

Khan was recently participating in the Equal Playing Field (ELP) initiative held in France. She took part in a 5-a-side match that went on for 69 hours. It started on 28th June and ended on 1st July.

About 807 multi-talented and highly-skilled female players participated in the match. Thus, the match went down in history as most players in a five-a-side match. Furthermore, Hajra successfully secured 6 goals in 4 hours of play.

Previously, she bagged her second record when she participated in a 1-a-side soccer match in which she secured 2-goals. Hajra has become an icon in the world of sports for all young girls who wish to make a career in sports.

She has become a symbol of women empowerment along with other great names in sports history like Sana Mir and Sania Mirza who have always spoken in regards to encouraging more girls to play sports.

Her performance has gained lots of attraction in hopes for the government to improve infrastructure for female sports players in the country. Actress Sanam Saeed and current Pakistan Government (PTI) have also shown their support for Hajra’s accomplishments.

Brandsynario gives their warmest wishes to Hajra and hopes to see her soar even higher in the near future!

Kudos to the women of Pakistan!