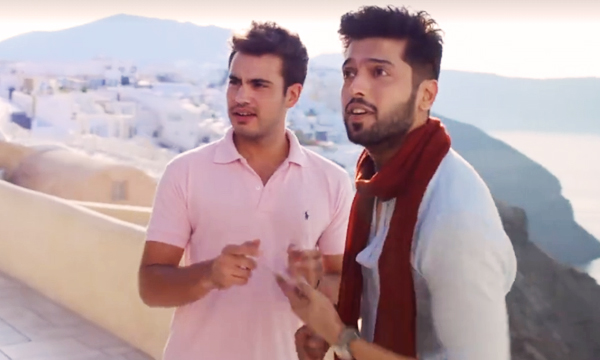 Fahad Mustafa’s much- hyped QMobile #LT700Pro TVC is out and it’s everything we were hoping it would be! Previously starring in QMobile Lt 700 TVC, the hunk has shot this QMobile TVC in Santorini, Greece.

Watch the QMobile #LT700Pro TVC below:

The very handsome and charming Fahad Mustafa just wrapped up promoting his upcoming Pakistani flick, Actor in Law and has already gotten busy with yet another interesting project! Recently spotted in the beautiful Santorini, Greece, the actor seems to be having the time of his life. Donning a red scarf, a sky-blue shirt, ultra-chic shades, ripped jeans and the very ‘in’ white sneakers, the actor looks uber-cool during his shoot! Seems like the ‘Na Maloom Afraad’ actor is having the time of his life at the gorgeous location. Well, these pictures sure prove that. Watch his video below:

The phone brand is known for harboring the very popular Bollywood ‘Kapoors’ as ambassadors; Kareena Kapoor, Arjun Kapoor, Aditya Roy Kapoor and the divas like Priyanka Chopra and Jacqueline Fernandes have also been ambassadors for the brand.