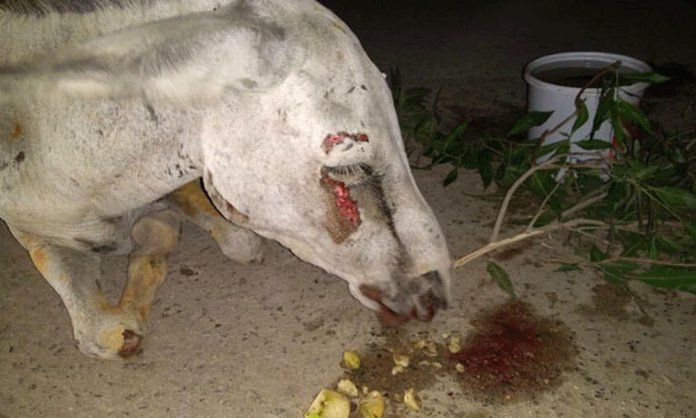 Update: Hero, the name given to the brave donkey who was tortured to near death a couple of days ago has scuffled to his injuries. The animal was found by a passerby who alerted and immediately handed him over to Ayesha Chundrigar Foundation.

The mule was found with a broken nose, who was also punched in the abdomen and rammed with a car several times after being roped to a lamp post. The hooligans responsible were targeting PLM-N to degrade them after Imran Khan had addressed the rivals as ‘Donkeys’.

Our Hero just passed away.

He was doing a lot better until yesterday, he managed to stand up on his own, eat powdered food although he had a broken jaw, and drink water on his own. He had been on IV drips, multivitamins and antibiotics. His external wounds were healing. He was just skin and bones and unbelievably weak and malnourished, like he was starved for days. And constipated at the same time. He had colic that can be fatal in donkeys although his seemed to be getting better.

We kept his temperature under control, massaged and cuddled him to calm down him as he would try take faltering steps, distressed, suffering from post traumatic stress, his heart pounding a mile a minute.

However, this morning, his blood pressure was too high, his temperature kept fluctuating hence he was under constant observation, he started bleeding from his nose and he couldn’t breathe properly anymore.

His internal injuries due to the violence he faced, were too much for him to bear.

He just saw a week of happiness, peace and love with us, and we saw this beautiful, intelligent personality who was abused and tortured for absolutely no reason, for no fault of his own.

Hero should never had suffered for even a moment in life. Hero was the epitome of purity and innocence. Shame on us for doing this to him and not being able to curtail this menace of torture and abuse of animals and human beings alike. We are to be blamed for not bothering to raise our voices for the most ignored, neglected and tortured inhabitants of our society.

We have to think and act upon this, there cannot be and should not be more Heroes who suffer at the hands of humans.

With Elections 2018 just a few days away, all political parties have maximized all presentations whether it be on social media, via SMS carriers or rallies.

While on one hand, Pakistanis are showing their love and support for their leaders, there are some to have stooped low to an unbelievable level, which is sick, disgusting, and shameful.

A hate crime in which an innocent creature was mercilessly beaten just to degrade another political party was taken place which has gone viral on social media.

Not only has it left thousands heart-broken, it has also opened eyes as to how we have now actually lost all our humanity and are no more God-fearing.

A donkey was found with a broken nose, who was also punched in the abdomen and rammed with a car several times after being roped to a lamp post. The hooligans responsible also wrote the word “a**” to describe their rivals on the animal’s body. 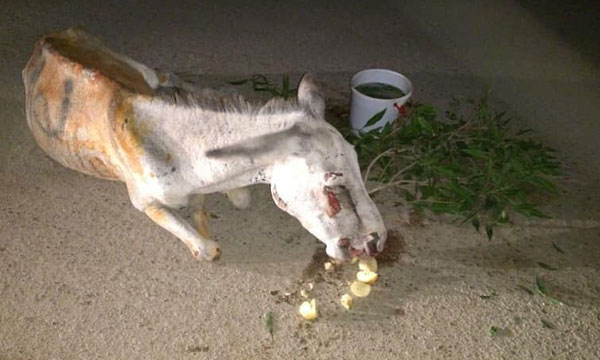 The poor thing could barely stand on its feet when it was found as it had collapsed from the nightmare. The animal was immediately handed over to Ayesha Chundrigar Foundation (ACF) which is known for their work in rescuing abandoned and injured animals.

ACF’s management took it to Facebook to share their two cents. They expressed how furious and intimidating this act is and how mankind can be so cruel. ACF described the condition of the little animal when they arrived at the location. 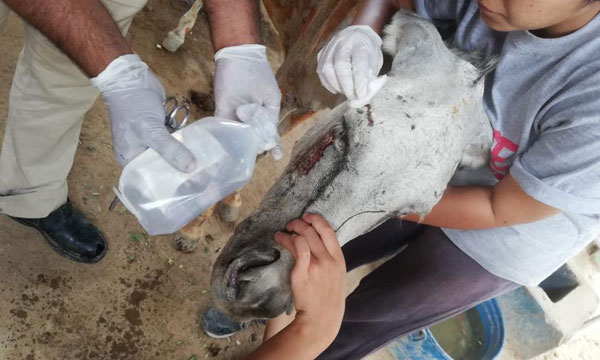 “The donkey has multiple wounds, all fresh from the beatings, punches, and kicks he endured.

The Wound near his rear was an old abscess which burst probably when he collapsed. His nostrils have been ripped apart and his face was bleeding from all the wounds.

There are no signs of internal injury thus far.

He is not eating much and his body is still stiff yet shaking in fear. His wounds have been cleaned and he has been given painkillers. He is drinking water on his own.

The girls at the shelter are sitting with him, hugging him, crying with him. He winces at any touch because he thinks each one will hurt.

Is this what our country has come to? Or is this what it’s always been? And social media and a little bit of animal welfare have now highlighted what we always were and are. Monsters.”

Elections are a time for Pakistanis to unite with one another. A time when there is no Shia, No Sunni, No Sikh or Hindu or Christian, but everyone is a Pakistani who respects one another’s political views and together stands up for the rights we deserve, the rights we are born with.

Instead of fighting, disrespecting one another, hurting people and innocent animals, we should think about coming together to solve water disputes, end load shedding, take up environmental challenges seriously, focus on the education system, and come together to end corruption for good.

This year, vote for our future generations, vote to bring back Quaid-e-Azam’s Pakistan, not for power, money, or fake promises. It’s now or never, the decision and fate of your country is in your hands!