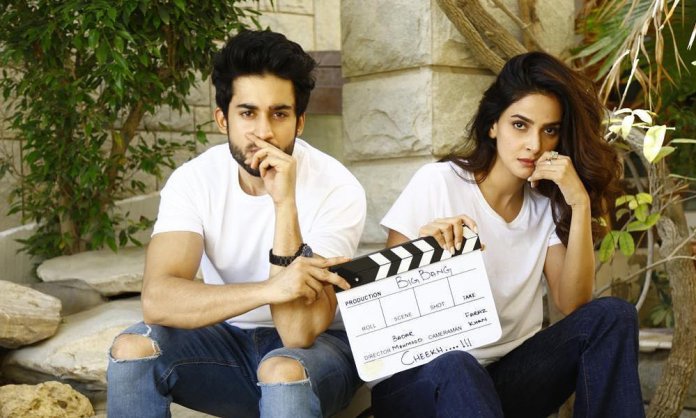 Starring the ever-gorgeous Saba Qamar and the heartthrob Bilal Abbas Khan, Big Bang Productions is coming up with yet another exciting project, Cheekh, that is going to air from 5th January 2019.

After Aisi Hai Tanhai, this is going to be Badar’s Mehmood second project as director with Fahad Mustafa and Dr. Ali Kazmi, the producers of Cheekh.

It is currently under the floors and will air on ARY Digital under the banners of Big Bang Productions.

Revealing that Cheekh is not going to be a typical kind of love story but rather something out of the box, Bilal Abbas Khan shared how his wish to work with Saba Qamar has finally come true!

Truly a wish coming true, working with the iconic @sabaqamarzaman for the first time. What a memorable experience! Also, get ready for something completely out of the box. Get ready for #Cheekh ! Directed by the amazing @badarmehmood Penned by @zanjabeelasim

The Baaghi actress also poured down her thoughts about working with Bilal Abbas Khan, who is not only a brilliant actor but also a superb performer.

Bilal Abbas Khan is currently starring in an ongoing TV serial, Bala and is being lauded for his outstanding performance in it.

We rarely hear the inward music, but we’re all dancing to it nevertheless.

Saba Qamar is yet to make a comeback on TV after the super hit drama Baaghi, that made rounds everywhere.

Both the actors have a huge fan following and their fans can’t wait to see them together on screens. Prior to this project, Saba Qamar and Bilal Abbas Khan had a friendly interaction on Instagram.

Admiring his work in O Rangreza, Saba wrote how she was impressed by Bilal’s performance and would like to work with him sometime. In response Bilal sounded overwhelmed, revealing how Saba is his favorite actress!

Well, as exciting as it sounds, the duo will finally be seen working together in Cheekh and it will be interesting to see their onscreen chemistry. Though more details are yet to be revealed, it will be tough waiting for this one!

Every Saturday (Starting from 5th January 2019)