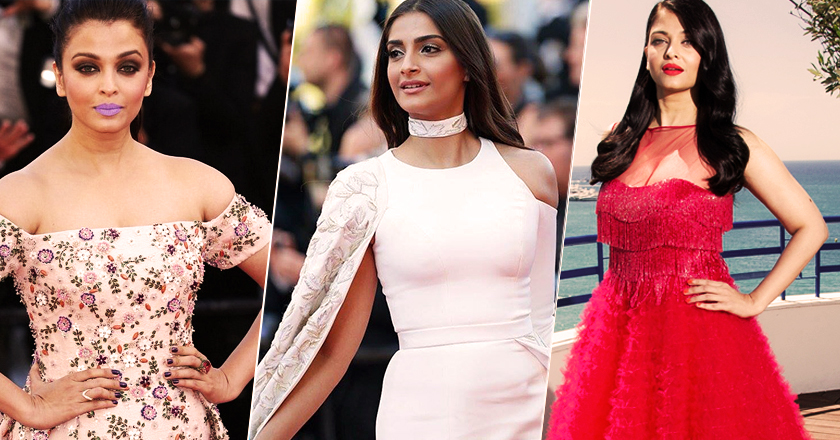 This year, at the 69th international film festival, Cannes, many Bollywood faces were seen including the Bachchan Bahu, the stylish Sonam Kapoor and the sizzling Mallika Sherawat who was the first Bollywood actor to walk the red carpet.

Check out their breathtakingly gorgeous looks from the Cannes Film Festival 2016 Red Carpet!

Despite her self-proclaimed unpreparedness, the Bollywood actress managed to pick the perfect dress for her first Red Carpet appearance at Cannes.

The former Miss World Aishwarya Rai has been displaying her love for gold on the red carpet by donning two gold gowns back to back on the red carpet. The actress gave donned a red gown on Day 2 of the gala!

However, the eye catching makeup choice has been the talk of social media; Aishwarya Rai turned up in purple lips and a golden Rami Kadi gown on Cannes Film Festival Day 3.

While some have been applauding the actress for the bold choice, others have been slamming her move, what do you think of her look? Aishwarya Rai Bachchan has attended Cannes Film Festival for the 15th time. This year she wore a champagne colored studded gown on day 1, with a cape by Lebanese fashion designer Ali Younes. Aishwarya along with her 4 year old daughter arrived at Cannes on Friday afternoon, a few hours before appearing on the red carpet.

The gorgeous actress stunned in a grey/silver gown, looking nothing less than a princess on Day 2 of Cannes Film Festival 2016.

On my way to the red carpet , thank you @GeorgesHobeika for the lovely gown, @deGRISOGONO for the diamonds pic.twitter.com/qlDQRUNyzN

Thank you all for making my red carpet opening ceremony such a great success! #Cannes2016 @Festival_Cannes pic.twitter.com/wAoXWyb32m

The fashion diva of Bollywood, slayed the Cannes 2016 Red Carpet as she stunned in an ethereal white gown  from her favourite designer, Ralph & Russo. One bare shoulder, the classic gown is paired with a choker, soft curls, hot pink lips and shimmery eyes.

Sonam Kapoor has completed six years of attending the festival in 2016. She will walk the red carpet on May 15th and 16.

“As opposed to what people would assume, I don’t really think about it at all. There is no pressure on me. I don’t take myself too seriously,” Sonam told IANS.

“I’ve always felt great in everything I’ve worn and it has always appealed to my sensibilities. The best way to bring your A-game on the red carpet is to be yourself,” says Sonam.