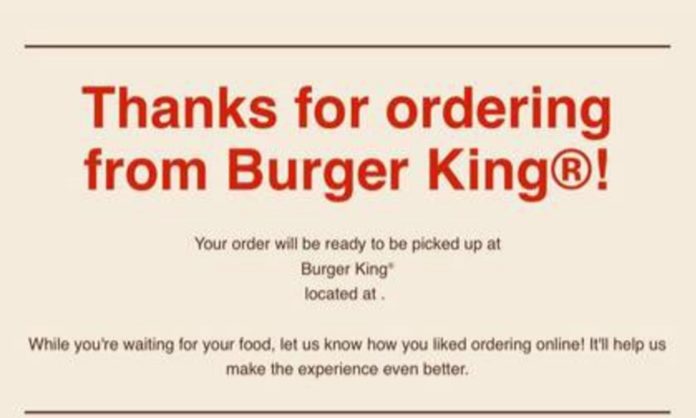 Burger King has confused a whole group of people by emailing them a blank receipt with many joking that they’ve made a ‘Whopper’ of a mistake.

In the early hours of 9th August, customers started receiving emails saying ‘thanks for ordering from Burger King’ – even though they hadn’t placed an order.

But when they opened the messages, they faced an utterly blank statement, causing a great deal of confusion.

An “internal processing error” is responsible for a bunch of blank receipts. The sender of the receipt was an official Burger King email account when emails were placed overnight into Tuesday morning. A representative for Burger King confirmed to Nexstar. The number of the recipients is unclear, but according to the reports, thousands got the emails in error.

“Thank you for ordering from Burger King!” reads a message included with the receipt. “Your order will be ready to be picked up at Burger King located at [blank].”

The order information listed within the emailed receipt was also wholly blank.

Read More: These Are The Best Foods To Keep You Hydrated

The email recipients took to Twitter to share the details regarding the emails. “Did anyone get a blank Burger King receipt in their email? I’m just curious. I never eat there,” one user said

i just got a completely blank burger king receipt in my email. it is 12:30 in the morning and i did not order burger king. i do not think i have EVER ordered burger king. this is so menacing pic.twitter.com/QvjhdPcEO3

Hey @BurgerKing why did everybody & their grandmother get this email at once?

Even my roommate got one. #BurgerKing pic.twitter.com/uBFGQtjb56

Burger King immediately took notice of the error as they responded to multiple customer queries on Twitter, saying, “Thank you for reaching out. We are aware of the issue and are investigating internally.”

Hi. Thank you for reaching out. We are aware of the issue and are investigating internally. https://t.co/x3nIBXxbfa

Burger King representative says that an “internal processing error” was responsible for the blank receipts.

However, they declined to comment whether the emails were sent only to customers who signed up for the Burger King app or perhaps a broader email database. Meanwhile, it did not immediately appear that any email recipients had been charged or their information had been compromised.

Read More: Is Coffee Good For You Or Not?