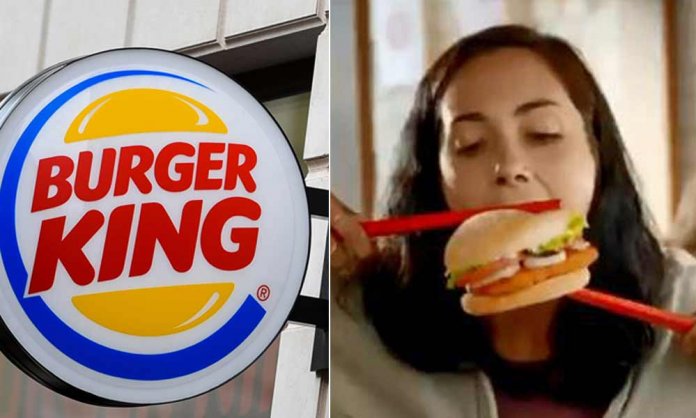 The fast-food giant, Burger King recently pulled down a racist ad rolled out by its New Zealand Franchise after it sparked an intensive round of criticism for the brand.

The ad showed Westerners attempting to eat its ‘Vietnamese Sweet Chilli Tendercrisp Burger’ through the aid of oversized chopsticks.

“Take your tastebuds all the way to Ho Chi Minh City with our Vietnamese Sweet Chilli Tendercrisp, part of our Tastes of the World range. Available for a limited time only”

Burger King Pranks McDonald’s with an Epic Offer for Fans!

Naturally, the Asian community around the globe found the ad offensive since the chopsticks signify a significant cultural value for them.

A number of ad viewers took the issue to Twitter making the hashtag #burgerkingracist go viral.

Using chopsticks to eat hamburgers? Gee, such a lame idea seriously 🙂 It doesn’t show your sense of humor, it shows your superficiality and racism 🙂 #burgerkingracist pic.twitter.com/kx7IiKezdY

The Vietnamese now want Burger King to leave the country.

We don’t need Burger King. We have many traditional food and it is more delicious than your fast food. Get out of my country #burgerkingracist https://t.co/sJkgcKPPix

What's the fuck happened ??? They couldn't eat their shit an usual way ??? How lame 🤦‍♀️ #burgerkingracist

Post backlash, Burger King has ordered the franchise to take the ad down from all social media platforms. They apologized saying the ad was not representative of their true values of inclusion and diversity.

“Insensitive and does not reflect our brand values regarding diversity and inclusion.

What is your view on the ad? Let us know in the comments below.