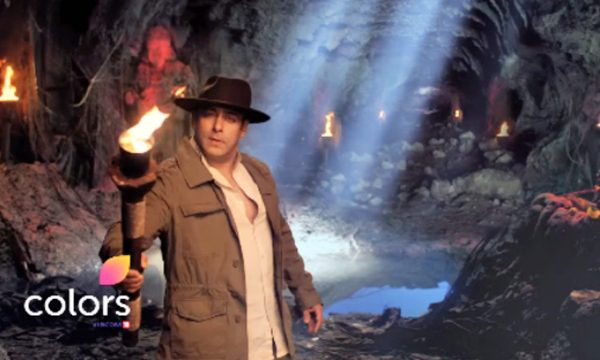 According to reports, Bigg Boss 10 will kick-start from October 16th. The superstar host of Bigg Boss 10, Salman Khan is pulling all stops, creating just enough buzz for the new season. For the 4th promo of the show, Salman has donned an Indiana Jones inspired character. He promises several more twists and different plots to be followed in the show. In the new promo, he is inside a cave and with a torch lit in his hands.

The actor was seen as an astronaut in the first promo, and as a wrestler, Sultan in the second one. He was seen inside a lift in the third promo.

In an earlier promo Salman Khan has donned a totally different avatar to promote the season. This time, the superstar dressed as an astronaut  to surprise his fans!

The space suit is created by his favorite designer Ashley Rebello and Khan was very excited to enthrall his viewers with something shockingly different on Bigg Boss.

“Salman was really kicked about it because no one has attempted to play an astronaut in Bollywood before,” revealed a source from the show’s set. Check out the promo video for Bigg Boss 10 and see Salman Khan land on the moon.

Speaking to The Times of India, Salman had revealed “This year Bigg Boss is going to be the most stressful one for me. This season is going to have celebrities, stars and also the common man. It is going to be very challenging as people from different sectors are going to be a part of it.”

Will Bigg Boss 10 be as different as the season’s promo, let’s wait and watch!

India’s most popular reality show, ‘Bigg Boss’ that airs on Colors TV have provided an insight into the lives of celebrities since 2006. The show is now returning with Salman Khan as the host in the primetime slot of 9 pm.

However, there is also news that the controversial reality show will now open doors for the common people who can appear as contestants alongside the celebrity stars of the show, from next season onwards.

It has been unveiled that the show will be making a comeback on our screens this year in October- so few months to go for your favorite show to hit the screens once again. The channel will be declaring the contestant names of the reality TV show soon.

After receiving several emails and text messages from the show’s fans, the makers finally decided to give the general public a chance to be a part of the show from ‘Bigg Boss 10’ onwards. The entries have started rolling in from the finale show of Bigg Boss 9 on Saturday and the entries will be accepted till May 31st.

The general public will be selected irrespective of their socio-economic background. The CEO of the Colors TV Channels, Raj Nayak made the official announcement revealing the details regarding how the common people can apply and participate as a contestant on the show. “As we take on this interesting content innovation, we look forward to receiving some interesting entries from our increasing viewer base. We will be scouting for some great contestants in the months to come. You could be a doctor, engineer, lawyer, teacher, preacher, banker, entrepreneur, home-maker, taxi-driver, coolie, from any domain, any socio-economic background, have any calibre, if you think you are an entertainer, then this is the break that you have been looking for,” says Raj Nayak.

As reported by India Today, the interested participants will have to upload a three-minute video on www.colorstv.com/biggbossentry, displaying their special talents making them eligible to be a part of Bigg Boss 10″ as contestants.

“Every year we receive thousands of emails, SMS texts, etc. enquiring about ways to enter the show. Finally, the day has arrived. Hope the fans and avid viewers make full use of this opening,” the Colors CEO stated.

People can send in their videos from the 23rd of January to 31st of May after which the candidates will be shortlisted and will then be called for auditions. Meanwhile, the show makes will be focused towards the selection of other celebrity contestants for ‘Bigg Boss 10’.