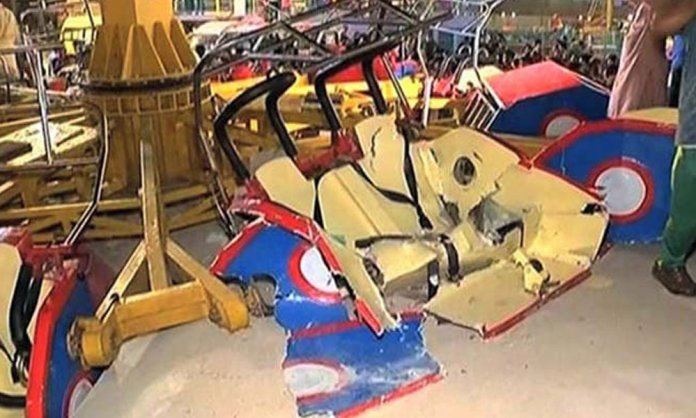 A fatal ride accident took the life of a teenager while injuring almost 20 others. This horrific incident took place at Karachi’s newly inaugurated Askari Amusement Park.

“She was our motive to smile” – Abdul Samad, Kashaf’s father

After the ride proved to be fatal for 16-year old Kashaf Samad, the authority and media were informed and an inquiry was conducted. According to reports, the reason behind the collapse was due to broken bolts. The Chinese engineers behind the rides were summoned for further investigation.

Zubair Tufail, well-known industrialist and a shareholder in the park added that the ride was purchased from China and the engineers also agree that the chances of 20 bolts being compromised all at the same time are bleak.

On the other hand,  Karachi Municipal Commissioner (KMC) has denied having any ownership towards the park as they claim it was purchased from them back in 2004, the year when Old Subzimandi was shifted to Super Highway.

According to Commissioner Karachi Saleh Farooqui two aspects are currently being considered. He said;

The police also stated that the family took an entire day to lodge the FIR and the park’s management was in touch with them to work things out. The father was at first not willing to file the charges against the individuals behind it.

Farooqui also added that the park’s administration was found to use “substandard material” which is a clear sign of negligence. A senior police official told Dawn News that “two sides of the swing are attached broke at the place where the riders’ side is connected through rivets.”

Farooqui had announced last night that the park would remain closed until a full technical check-up would be completed.

Brandsynario is sorry for the loss of Mr. and Mrs. Samad, truly it is a very sad and unfortunate.

Apple to Collaborate with Malala Yousafzai to Educate Girls