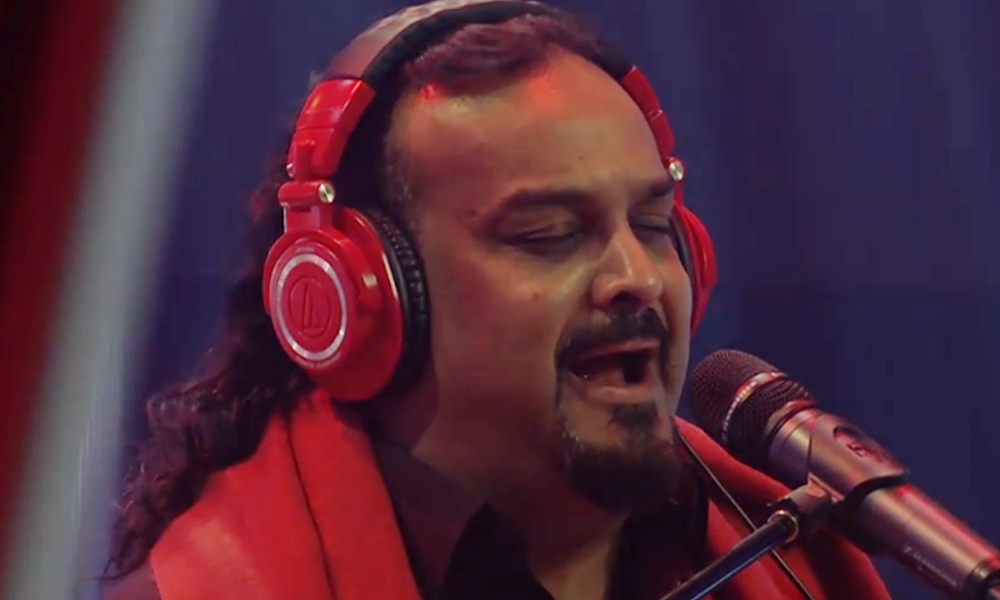 A glimpse of Sabri in the the promo “Ah Rahe Haq K Shaheedo“  of Coke Studio 9, tune managed to move hearts, leaving us all teary eyed and now the song is out and it is giving us goosebumps. Vocal powerhouses, the Amjad Sabri and the legendary Rahat Fateh Ali Khan’s kalaam was packed power and energy.

The epic qawwali was echoed in a shrine, 40 years ago, performed by the legendary Nusrat Fateh Ali Khan and the qawwali maestro Ghulam Farid Sabri. The song soared high in all its glory and the contemporary veteran did justice to the rendition! ‘The Sabri and the Khan’ clan reunited for the first time since then and took the songs to even greater heights.

Listen to the epic tune below:

Recorded only in the first take, the tune grasps you and takes you somewhere else entirely. It warms your heart and will keep doing so for many more decades. It is eerie how just a few days before Sabri’s death, Sabri and Rahat Fateh Ali Khan teamed up to sing the evergreen Amir Khusro qawwali, Aj Rang Hai.

The hype and fervor were on the rise with every passing day.These memes below show how excited people were for the Coke Studio Season 9 Finale! It is sad that while the world is praising Sabri’s rendition on Coke Studio, the music guru is not amongst us to witness the memorable Sufi symphony.

While the song was being recorded in May this year, the late Amjad Sabri talked about his performance, “About 40 years ago, my father and Nusrat Fateh Ali Khan read this kalaam at a dargah in Karachi and 40 years later, Rahat and I are reading it again (on Coke Studio Season 9).”

Twitter went crazy after the song was released, with fans yearning and reminiscing the Sufi singer. It was heartbreaking and equally delightful to listen to him sing one last time:

#AmjadSabri at #CokeStudio9 leaves me in tears – in total awe, gone to soon – at a loss of words to express the emotional rush

And Amjad Sabri nailed it again one last time. Still can't believe he is no more with us
"Aj Rang hai" #CokeStudio9 #AmjadSabri pic.twitter.com/QOsKae092n

One last time, legend, gone but will never be forgotten #CokeStudio9 #AmjadSabri

he will be missed 🙁 #AmjadSabri

What a gem he was, institution himself.#AmjadSabri #CokeStudio9

Its a masterpiece. Best gift to tell our coming generations who #Amjadsabri was. #CokeStudio9

This song was everything! So nice. I can't even 😭 #AmjadSabri 💔 https://t.co/N11WVjhlyF

Sabri never made an appearance in Coke Studio before, however, he did facilitate Atif Aslam in Tajdar- e- Haram, performed in Season 8.

“The tragic death of Amjad Sabri is a huge national loss. In spite of his great success nationally and internationally, he was a gentle and humble person, treasured and respected by everyone who met him,” Strings said in a statement. Leaving an impact across generations, Sabri’s touching voice will continue to inspire millions of souls all across the world. Sabri’s Coke Studio debut is his final performance, closing a stellar career that stretched over nearly four decades. The legend’s tragic death struck the whole nation with shock and grief. The veteran singer left behind a legacy of an inimitable worth of soulful music which will forever be cherished!

Gone but never forgotten, he will forever live in our hearts and souls.

What do you have to say about the song? Let us know in the comments below.