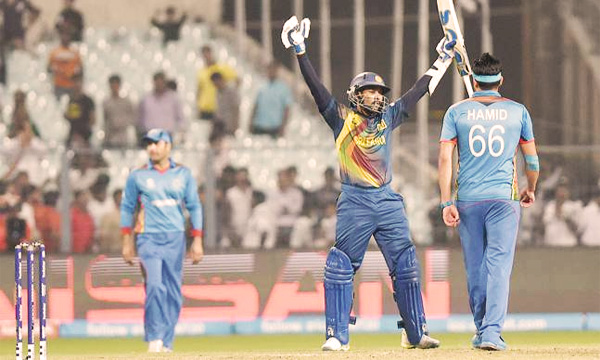 Opener Tillakaratne Dilshan said he was desperate to score some big runs after steering holders Sri Lanka to a six-wicket win over a spirited Afghanistan in the World Twenty20 on Thursday.

The big-hitting Dilshan kept his nerves under pressure and carried his bat through for an unbeaten 83 off just 56 balls, his 13th half-century in the shortest format of the game.

His effort helped the islanders surpass Afghanistan’s 153-7 with seven balls to spare at the Eden Gardens stadium in Kolkata.

“In my last two games I had two ducks. I needed runs going into the big games. I’m really happy that I finished the game,” Dilshan, 39, said after being named man-of-the-match.

“In these kinds of tournaments, the first match is very important. Senior guys need to stand up and do it for the team (so that) the middle order can bat around us.” Afghanistan, the only non-Test team left in the fray, paid the price for some sloppy fielding after an impressive effort with the bat that saw skipper Asghar Stanikzai make a fine 47-ball 62.

Dilshan gave Sri Lanka a flying start, smacking fast bowler Dawlat Zadran for two sixes on the trot, including one that came off his famous ‘Dilscoop’ shot which typically sails over the wicketkeeper’s head.

Wicket-keeper Mohammad Shahzad then sent back Thisara Perera with a direct throw at the stumps as Sri Lanka slipped to 85-3, but Dilshan kept his cool to ensure a smooth finish for his side in the end.

“Our total was good, not bad. We were 10-15 runs short. But Dilshan played really well, he took responsibility and batted well,” Stanikzai said.

“Our fielding wasn’t good, we missed some chances. We’ll try to improve in the next games.”

Earlier, Stanikzai led his side by example while Samiullah Shenwari chipped in with a handy 31 to help Afghanistan recover from a shaky 51-4.

Paceman Thisara Perera picked up 3-33 in an otherwise disappointing show by the Sri Lankan bowlers who let the Afghans off the hook after a promising start.

Shahzad, who came into the match with a top-score of 61 in the qualifiers, lobbed an easy catch to Dushmantha Chameera as he tried to pull to the legside.

Shahzad’s opening partner Noor Ali Zadran smacked paceman Nuwan Kulasekara for two boundaries in a row before being bowled by Rangana Herath (2-24) for a 23-ball 20.

Afghanistan suffered another blow soon after when Karim Sadiq (zero) nicked one behind off Perera, but Stanikzai steadied the innings with his quickfire knock, his best in Twenty20 internationals.

Stanikzai seemed to clear the ropes easily, twice lofting spinner Milinda Siriwardana into the stands, much to the delight of a small but noisy group of Afghan fans.

The skipper’s counter-attack came to an end when he was caught by wicketkeeper Chandimal off Perera in the 19th over.

Mathews was relieved his team managed to put behind the recent disappointments and start off their campaign with a win.

“It was a much-needed victory for us because we haven’t played well in the recent past,” he said.

“Credit should go to the Afghanistan batters as well because they really put us under pressure.”