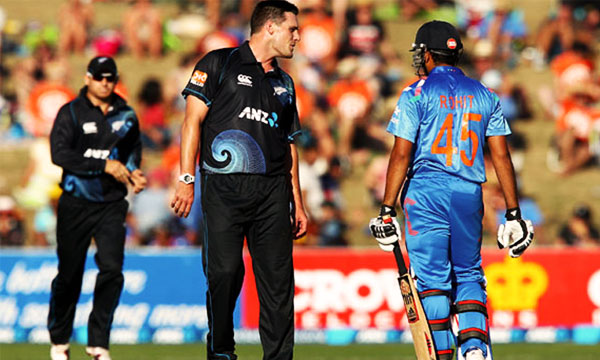 The main World T20 2016 round kicks starts today with much-anticipated, a high-voltage face off between the two cricket giants, New Zealand and India at Nagpur.

Hosts and hot favourites India begin their quest Tuesday to become the first team to win cricket’s World Twenty20 twice as they get the group stages under way against bogey team New Zealand.

While Mahendra Singh Dhoni’s men are trying to keep their feet on the ground, fans and legends of the game are fuelling a growing mood that no one can stop a side that has won 10 of its last 11 T20 internationals.

It is the first time that India has hosted the world cup of cricket’s newest format, a tournament they were initially cool on until Dhoni led them to victory in the inaugural event in South Africa nine years ago.

Kapil Dev, the hero of India’s 1983 50-over World Cup triumph, believes that India “are the overwhelming favourites” to win the T20 trophy again, this time in their own backyard.

“India has the strongest set of players, and never has any team looked so formidable and sure of winning the title as they do at this tournament,” Kapil wrote in the Mail Today newspaper on Tuesday. But wary of India’s woeful track record against the Black Caps in the tournament, star batsman Virat Kohli says the hosts cannot afford to be complacent.

India has lost four out of their five previous World T20 encounters against New Zealand while the other match was rained off.

“What we’ve learned from playing in big tournaments in the past is that we have to stay as calm as possible and focus on the skills that need to be executed on the field,” Kohli said in a pre-match press conference.

New Zealand, beaten finalists in last year’s 50-over World Cup, are determined to prove that there is life after the recent retirement of their talismanic skipper Brendon McCullum.

The Black Caps will also want to put on a performance to make the late Martin Crowe proud after the recent death of their country’s greatest batsman, and will wear black armbands in tribute.

“Some blokes in the side, they were very close to Martin and I guess they will deal it in their own way throughout the tournament and throughout the cricket that is coming up,” said new captain Kane Williamson.

“He was a big part of their lives as a cricketer and as a person.”

The opening match in Nagpur is widely expected to yield a feast of runs, with India’s front-line batsmen all in form while New Zealand has an array of big-hitters who have racked up big scores in the warm-ups. They thrashed holders Sri Lanka last week when Colin Munro, Grant Elliott and Corey Anderson all posted rapid half-centuries, while Williamson smashed an entertaining 63 in a narrow defeat to England on Saturday.

The build-up to the tournament has been marred by a row over security forPakistan, who delayed their departure until organisers agreed to switch Saturday’s match against arch-rivals India from Dharamsala to Kolkata.

Fans outside India were also left exasperated by the late release of tickets which only went on sale late last month.

While India can expect to be roared on by a packed house, New Zealand’s famous ‘Beige Brigade’ supporters are likely to be thin on the ground in Nagpur.