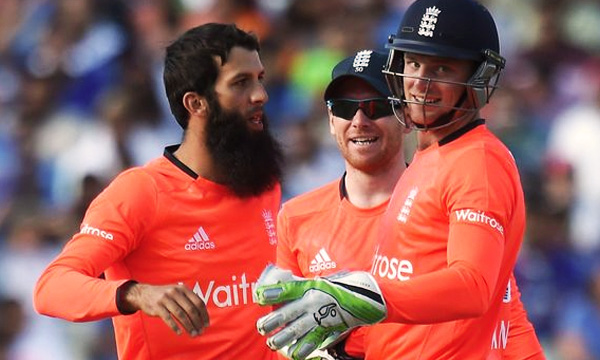 Spinner Moeen Ali admitted England’s bowlers are hoping for some respite Monday as they lick their wounds after being pummelled by South Africa and a rampant Chris Gayle in cricket‘s World Twenty20.

Although England is on a high after their record-breaking win over South Africa on Friday, their bowlers were once again clattered to all corners at Mumbai’s Wankhede Stadium as the Proteas raced to a huge total of 229.

Reece Topley went for 33 in just two overs while Chris Jordan conceded 49 in a three-over stint against the South Africans whose own star bowler, Dale Steyn, was subsequently carted around the ground.

Ali was the most economic bowler against South Africa but still went for nearly nine an over and was one of those on the receiving end last Wednesday when Chris Gayle smashed 11 sixes in a brutal century.

“I have not enjoyed bowling in Mumbai so far,” said Ali after England arrived in New Delhi where they will play their next two group matches against Afghanistan on Wednesday and the holders Sri Lanka on Saturday.

“I think the (Delhi) wicket is going to be a little bit slower though I haven’t seen it so I don’t expect the runs to be coming as quick as Mumbai.”

Ali said he and his fellow spinner Adil Rashid had felt they “would love to be bowling” on other pitches which have turned sharply in the tournament, such as Nagpur where India lost to New Zealand.

But he conceded it has been tough for England’s quicker bowlers as well.

“I don’t think it has been very easy for the seamers. The grounds have been a little bit smaller and the pitches have been beautiful to bat on,” he said. “Hopefully, the bowlers are going to win us a game in the future.”

Despite their victory over South Africa, England not only needs to win their last two matches but must up their run-rate after losing to the West Indies.

England’s batsmen were generally in awesome form against South Africa but Ali, who has opened for the team but now bats at seven, has missed out in both matches and warned against complacency towards Afghanistan.

“They are a very good side. We saw yesterday they competed very well,” he added in reference to Afghanistan’s match against South Africa on Sunday when the minnows at one stage threatened an upset by reaching 105 for two while chasing 210.

“We are not going to take them lightly… It’s a tough game but hopefully we can win in the game.”