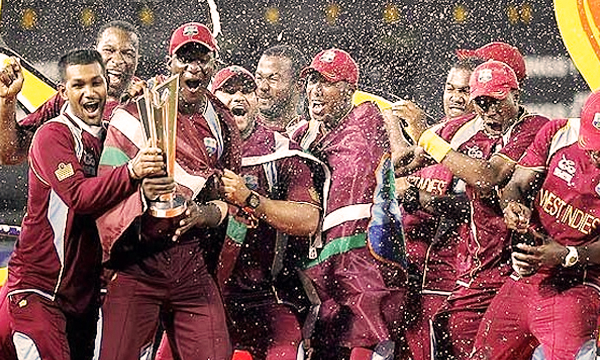 UPDATE: Carlos Brathwaite sensationally hit four successive sixes off Ben Stokes in the last over as the West Indies stunned England by four wickets to win the World Twenty20 title at Eden Gardens on Sunday.

They won with just two balls to spare having needed 19 off the last over as they became the first team to lift the trophy twice.

Chasing 156 to win, 27-year-old Brathwaite became the first player to hit four sixes off four balls as he made an undefeated 34 off 10 balls after taking 3-23 in the England innings.

Marlon Samuels finished on 85 off 66 balls.

“I can’t really express how much of a top knock (by Samuels) that was. We couldn’t turn back, it was a question of when not if,” said Brathwaite.

Bowling coach Curtly Ambrose was overjoyed after seeing his team follow the women’s title earlier in the day and the Under-19s taking their world crown earlier this year.

Watch the exciting last over of the Final World T20 2016 below:

“We believe we can chase any target because we’ve got some real firepower,” he said.

“It doesn’t matter how many you’ve got to chase. We won the under-19 and the women’s and now this, it’s history.

“Usually, I have sympathy for the bowlers but on this occasion, no!”

West Indies won the toss and elected to field first against England in the World Twenty20 final at Eden Gardens in Kolkata on Sunday.

Skipper Darren Sammy named an unchanged side from the one that defeated India in the semi-finals.

England and West Indies will battle to become the first two-time winners of cricket‘s World Twenty20 when they face each other in the tournament’s final Sunday, in a game that promises to be a six-hitting slugfest.

Eoin Morgan’s England will hope to complete a remarkable resurgence after exiting the 50-over World Cup a year ago in disgrace after losing to minnows Bangladesh and failing to progress from their group. The West Indies are also a born-again side inspired by the laid-back, huge-hitting Chris Gayle, and featuring a phalanx of stars such as Andre Russell, Dwayne Bravo and Lendl Simmons who have all had success plying their trade in money-spinning T20 leagues around the globe.

Having been embroiled in a players’ pay dispute at Test level, the West Indies have faced a barrage of criticism about their poor performances in the five-day game. But skipper Darren Sammy hit back on the eve of Sunday’s final at Eden Gardens.

“People just paint us as money-grabbing cricketers for our success in T20cricket, but yet they still don’t respect us in that (Test) format,” Sammy said.

Gayle, already the only man to have scored two hundreds in World Twenty20 history, will look to crack another landmark as the first batsman to record a century of sixes in T20 internationals, having already smashed a record 98.

Gayle has 11 of those in the current tournament. Ominously for England they all came in his 100 not out as the West Indies chased down 183 to beat Morgan’s men in the group stage. “We know we are a boundary-hitting team,” added Sammy. “So it’s about keeping our faith.”

England are adept at clearing the rope themselves and their tally of 34 sixes is the most by any team in the tournament, underlining their remarkable 12-month transformation under Irish-born Morgan.

Opening batsman Jason Roy, one of the stars of the new-look England, promised they would come at their opponents “with all guns blazing”.

“It’s going to be an incredible experience but we are going to play our natural way and the brand of cricket we have been playing for the last year,” said Roy, who pummelled 78 off 44 balls as England beat New Zealand in the semi-final.

The deadly collapse of a partially built flyover in the north-eastern city on Thursday, which killed 26 people, has also cast a pall ahead of the match.