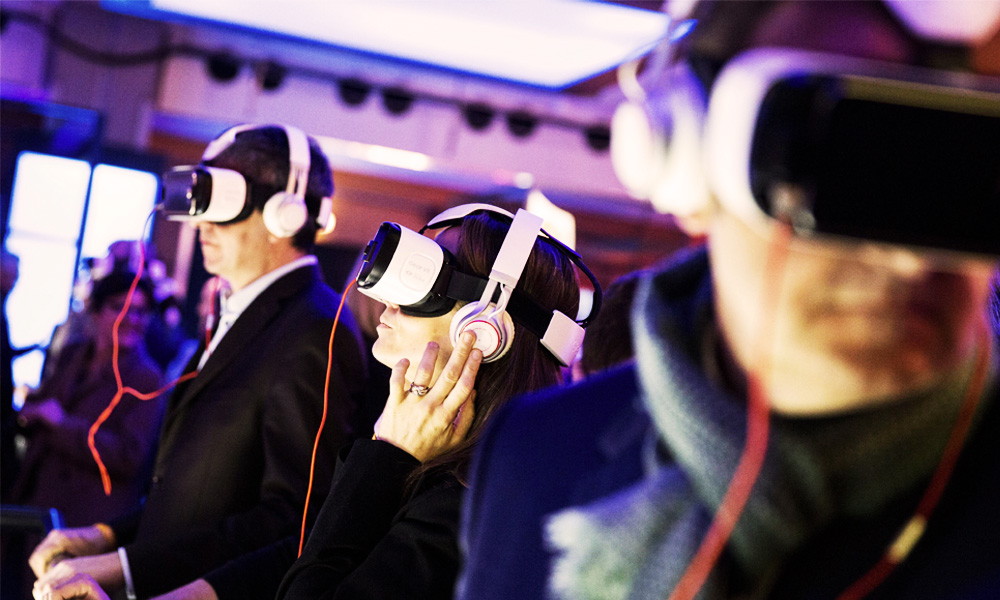 A middle-aged white man sees himself as a young black woman being taunted by a racist. An Israeli grandmother glimpses herself as a Palestinian teen. A star athlete experiences what life would be like in a wheelchair.

These are not plots of dystopian movies. They are experiences that take place in virtual reality, which technologists believe will be the next major platform for everything from gaming to social interaction and perhaps even global diplomacy.

The computer-generated images beamed to devices strapped around a person’s head allow users to experience “presence” — the sense that they’re entering video games or movies, climbing a treacherous Vietnamese mountain or scuba diving at a coral reef.

Potential benefits include hands-on teaching with a classroom of far-flung students or holding a business meeting whose global participants sense they’re rubbing elbows.

The upcoming rollout of the Oculus Rift — a $599 headset offering studio-quality VR to the general public — is expected to jump-start industry sales.

Sony meanwhile announced at this week’s Game Developers Conference in San Francisco it would launch its PlayStation VR headgear priced at $399 in October. Many others have VR equipment hitting the market.

Along with its cousin, augmented reality, VR is forecast as a huge market that could push aside smart phones and computer tablets.

From a California garage

VR has been a dream of futurists and tech geeks for decades. But until recently, devices were relegated to research labs because of their exorbitant cost, clunky construction and quality issues that included motion sickness.

At Stanford University’s Virtual Human Interaction Lab, experiments were done until 2014 with a $40,000 device that gave users neck aches; now the lab uses a lightweight Rift at a fraction of the cost.

“I believe in virtual reality and I believed it could be amazing, but that was not a view that was shared by everyone,” Rift inventor Palmer Luckey said.

The Rift, created in 2011 by Luckey in his parents’ California garage when he was 18, uses images and sounds (smell and touch may come later) to convince users’ brains they are flying over a city or standing on a skyscraper.

“Vision is really important. You rely on it for a majority of your senses,” said Jason Rubin, who as head of worldwide studios oversees content development for Oculus.

“So if we can take over your eyes, we can get control of your belief system.”

Oculus, bought by Facebook in 2014 for $2 billion, is competing with companies such as Google, Samsung and Sony in creating VR devices, with analysts expecting sales of 12 million headsets by the end of this year.

But Tim Merel, founder of technology advisory firm Digi-Capital, says VR will be eclipsed by augmented reality, or AR, within a few years.

VR is fully immersive, meaning a user can’t walk down a street wearing a headset. AR is partly immersive: a person can do everyday tasks while augmenting them with virtual images, using holograms (such as flying dinosaurs) superimposed on the user’s field of vision.

While Merel thinks VR will cannibalize video games and become a $30 billion market by 2020, he sees AR as taking over the smartphone and tablet market and accounting for $90 billion in annual sales in the same period.

Virtual Reality is Here to Stay, Smartphone Sales Slow Down

“Our broad view is that AR will be bigger, more disruptive and faster in terms of its effects than mobile was compared to the original Internet,” Merel said.

While most VR content now focuses on gaming, it has the potential to impact everything from architecture to military training to travel.

Developers envision its use in dealing with phobias and addiction, or in helping youngsters combat bullying. The United Nations is using a VR film to give people a sense of living in a Syrian refugee camp. The New York Times and others are using VR films for immersive news reports.

Jeremy Bailenson, a Stanford professor of communication who founded the lab, said school children might use VR for empathy training. But he acknowledged limits.

“Could this work in the Mideast conflict? I don’t know,” he said. “It’s not a magic bullet or anything.”

There also are potential risks, such as overuse or people discovering they’re more comfortable in a virtual world.

The Rift, about the size of a brick but considerably lighter, will be shipped March 28 to customers who pre-ordered it. Oculus is not yet saying when the device will be available in stores. Many users will need a new computer to run the Rift, potentially tripling the $599 price.

Luckey, who attended the developers conference in a Hawaiian shirt, shorts and flip-flops, acknowledged the Rift is still too expensive and limited in its capabilities, but that with improvements “it is going to go well beyond being a toy.”

“I think it’s going to be the next smartphone and the last smartphone. Once you perfect virtual reality, there’s no reason to create anything else,” he said. “I see people continuously moving between the real world and the virtual world.”