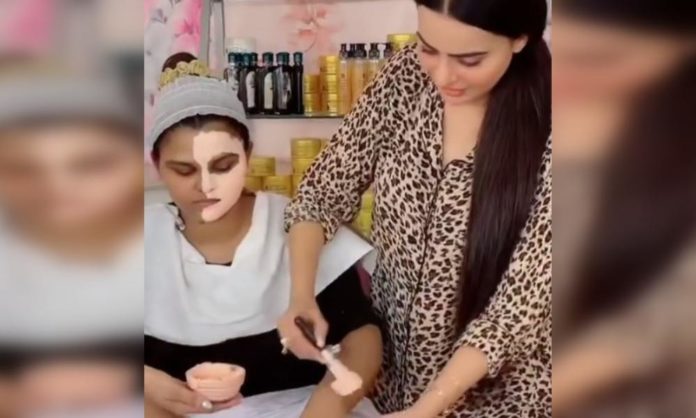 Our society’s obsession with fair and white skin is real as we are reminded time and again about it with marketing campaigns and whitening products. Celebrities, influencers have been making a lot of efforts lately to debunk the fair skin myth. But the moment we think there has been some progress, we are back to square one. A similar instance is reported again where a TikToker is promoting her fairness products on social media.

Dolly is a TikTok star who happens to run a salon in Lahore by the name of Dolly’s Signature Salon. She has launched various services, including a skincare line that she promoted recently on her social media. The girl mixes a few products in the video before moving on and applying a thick layer to the model’s face and arm. She then removes the entire product, which leaves behind tinted skin, somehow comparing it to a fair complexion.

The video she posted on Instagram is problematic and wrong on so many levels. No wonder she received so much media backlash. The products she is using do not have any scientific backing, for starters, since we do not know the product’s ingredients. This brings us to our next point: the environment where such brands are manufactured and packaged.

However, it isn’t evident when it comes to the product since we can’t understand its nature. Is it a bleaching cream that is expected to transform your skin tone or a foundation turning the model’s skin grey, gimmicking it for a fair complexion? We are not strange to the harmful effects certain whitening products can have on our skin. In a society where trying to expose the fairness obsession is already difficult, promoting such products on social media is a no-go.

The TikTok star received a lot of bitter responses since people understood the nature of the video. Influencers and netizens called out the star over her crude behavior.

Many people emphasized that her original complexion look much better and more authentic than the tinted one.

We hope that she can gain insight and explain the situation or her products to her followers and the public.