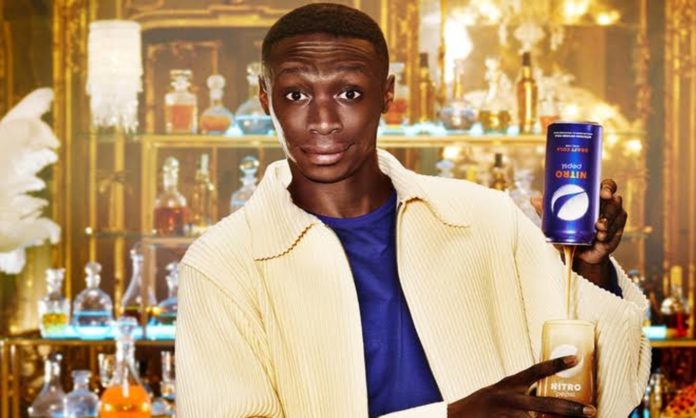 According to Marketing Dive, the silent Senegalese-Italian star with over 135 million TikTok followers has been recruited for the print, billboard, and TV ad campaign that will use the tagline “a smoother way to soda.”

Lame’s content largely involves him staging silent reactions to other users’ posts. While he focus on mocking “life-hack” or how-to videos that he deems counterintuitive.

Lame is the fastest-growing global account on TikTok, according to Pepsi, and the most-followed male creator on the platform.

In a TikTok video, Lame wordlessly demonstrates the proper way to pour the product while standing at a bar. Playing up the beverage’s more premium positioning, print and out-of-home ads emphasize the outsized facial expressions and gestures that have made Lame into a social media star.

“Since Khaby Lame is known for pointing out the obvious with the use of his signature hand gestures. We felt he was the perfect person to show the world Nitro Pepsi is a simple solution for those who prefer less carbonation than that of a traditional cola,” said Todd Kaplan, chief marketing officer at Pepsi, in a press statement.

Nitro Pepsi’s national expansion is further supported by TV ads airing around high-profile occasions like the Oscars and experiential activations. Starting March 25, the cola will be available on tap at the Sky Lounge of The High Roller Observation Wheel on the Vegas strip.

This is one of the many high profile brands that has enlisted the services of Khaby Lame recently. In October last year, he helped Mark Zuckerberg show people how easy to jump around in the metaverse. Meanwhile, early this year, Lame signed a multi-year deal with the iconic fashion line Hugo Boss.